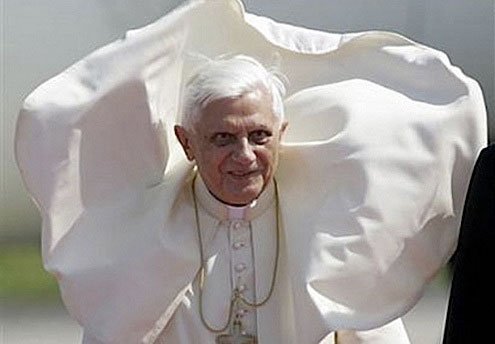 hank Pope Benedict, a theologian, for spiritual due diligence. It’s not easy to address Western crowds and tell them what presidents can’t or won’t: namely that religious extremism is a response as well as a complication.

Presidents are not in depth’s debt and turn to standard fare: “They” hate “us”; “they” hate “what we stand for.”

In Germany, the pontiff — who could moonlight essays for The New York Review of Books — shed light (albeit between the lines).

They hate us because we’re cynical, he said.

They hate us because we don’t believe in the letter of any god’s law. Not “our” god, any god.

The American Christian right, often noisy and hypocritical, would tip its hat without ado. They’d say that Muslim extremists loathe Christians and their values.

But they’d miss the pope’s point. For him, cynicism is the calculated humiliation of natural law, a process that sets off a chain reaction.

The affluent West’s disregard for spirituality, he suggests, disorders the natural universe, which in turn dismays those who still depend on faith to give them hope, arrange their thinking, and discipline their life choices. A macabre (and politically manipulated) offshoot of such resentment is a rage against those who do the disordering.

Church-going is not faith. Nor is pledging allegiance to a god. Faith in any religious enterprise is accepting the existence of a power greater than human intellect and deferring to its instruction.

The cynical world to which the pope refers makes spirituality an option and permits its mocking as a reputable feature of democracy. Religions close ranks. Publishing of drawings sarcastic toward Prophet Allah is disrespectful. Democracy, the pope says, equips itself with rationales to transit freely — and disagreeably — from idealism into cynicism and back again.

While secularists hail choice as a vibrant and necessary component of personal dignity, it appeal is less compelling in poorer cultures where “mob spirituality” (which mixes hard-line conformity with deep enthusiasm) keeps cynicism at bay. In such places, Christian or Muslim, believing is a reason for living.

According to the pope, enlightenment has taken a dangerous turn. It stands only for progress, but without a religious component. Progress is a stand-alone, which to believers is fundamentally disturbing.

Choice, not rigor, informs decisions, and purchase, not prayer, is the affirmation of record. This sometimes unhinges Muslim who have moved West (to France, the UK, the United States). They don’t miss political tyranny but question how a secular society can thrive without religious rules.

That is the rationalism that radicals would destroy.

But rationalism has its cynical side, says the pope.

What good is research alone?

Conquering disease is noble. But scientific demystification not framed by moral instruction is reckless. When breakthrough is its own goal and immediacy its own reward, success is mercantile. Conscience loses its position as a force within progress.

They fear us, they hate us, not because of freedom, the pope says, but because we’ve chosen to refine enlightenment in the absence of the sacred. We’re doers who worship only the done. Shock and awe, a biblical phrasing, is the inflicting of calamity. What god is its guide? A vengeful one yes, but tell of another? the pope asks.

Benedict’s remarks are in part self-serving; his church is losing adherents. Its most devout believers are its poor, as are Islam’s.

Sacrilege, the pope submits, is too casual a freedom.

Fear of God — hence God-fearing — is passé, and there’s no cover charge for the wages of sin.

Cynicism is progress minus spiritual esteem.

Why shouldn’t such disengagement inspire fear — and stir challenge among the more ardent defenders of the faith?

Why shouldn’t the billions in Africa and Asia for whom God or Allah is tenet and joy object to the exclusion and trivialization of His harmonizing force?

Disagree with Josef Ratzinger as you wish and will. You cannot, however, deny the verve of the provocation. It’s a drop of holy water on a dry tongue.