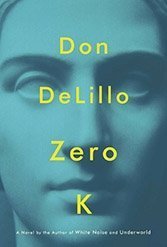 Something simply doesn’t click in “Zero K,” a rare occurrence with a novelist as accomplished and imaginative as Don DeLillo. Yet it’s true. At the core of the story is Jeffrey Lockhart, an directionless thirty-something New Yorker beckoned by his billionaire father Ross to a secretive underground complex in Central Asia where Ross’s ailing wife Artis will be euthanized, eviscerated and placed in cryonic pod storage until future advances release her stored molecules into a different state of being (Zero K stands for zero kelvin, a measure of cryonic freezing). The half-Hippie, half-Buddhist colony that arranges these transformations — or “veers” — is funded by arcane fat cats like “simulated man” Ross (born Nicholas Satterswaite) and known to insiders as the Convergence. Its multiethnic operators “speak an occult language,” use human-tissue mannequins as “postmortem décor” and advertise a brain-edited catacomb life “completely outside the narrative we refer to as history.”

Jeffrey, a self-styled cynic, doesn’t know what to think of the bizarre post-New Age goings on beneath the Uzbek desert — “that crack in the earth,” he calls it. He’s no fan but at the same time he’s burdened by “the soporifics of normalcy,” locked into life’s “middling drift” and beholden to “cautious behavior.” Following Artis’s cryonic entombment, the story shifts to Jeffery’s passive Manhattan life and times (“I leave objects as they are. I look and let them be…”), his girlfriend Emma and her adopted son Stak, a lanky teen from Ukraine who places online bets on potential hurricanes and terrorist acts. It finally circles back to the complex, when Ross, now two years older, decides to join Artis in the “long slow sabbatical in the capsule.”

Unlike “Mao II,” DeLillo’s ominous 1991 novel about masses, modernity, cults, and the prospect and consequences of global terror (“The future belongs to crowds.”), “Zero K” posits a future in the hands of a select few who can control death by seeming to manage and market it ahead of time. The sponsors of the method (dubbed The Stenmark Twins — “jokester visionaries” — by Jeffrey) speak in grave but vacant bromides.

The concept of cryonic storage would seem ideally suited to DeLillo, now 79, who has always enjoyed dabbling in the cuneiform of the future, sorting through its hieroglyphs and reflecting on states of self — “…humans stripped of adornment,” he writes of the pod-people, “spliced back to fetushood.” It’s wonderful stuff. But in the end he can’t decide whether to focus on Jeffrey, a man-child-cum-vagrant fascinated by details but unable to make decisions, or father Ross, a grieving pseudo-mystic who refuses to remember the name of Jeffrey’s mother Madeline, his first wife, and eventually morphs into a kind of Howard Hughes.

The result is a novel that while interested in the geometry of the transcendent — strange goings on in Uzbek hills — remains glued to “self-distracted” Jeffrey, who is put off, if not slightly intimidated, by both cryonic mumbo jumbo and the figure of his father, a dimly lit presence who never chose to occupy a significant place in his life.

Ostensibly, the story concerns identity in the 21st-century, and whether cryonic embalming — “body art with broad implications” — is any less improbable a choice than pressing ahead in a terrorism-driven “virtualized” society that cultivates “digital panic” for sport. But getting to DeLillo’s hard core is a chore. His novel aspires to awe — awe of life, awe of death — but the aspiration is unfocused enough to undermine the intimacy of the effort.