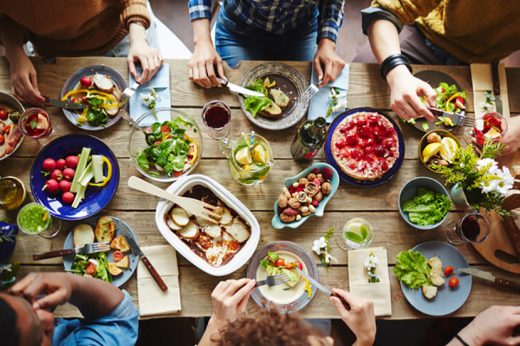 Health eating? Fair enough (with reservations). But please don't nix the wine…
A

m I becoming the H. L. Mencken of the food world? Lordy, I hope not, although he certainly had some fascinating things to say about where we were heading. A critic of literature, music, theatre, just about everything, old H. L. — born, raised and employed in turn-of-the-20th-century Baltimore — held all manner of powerful views, and he wasn’t shy about making them known in newspaper essays. I too am growing less shy. Increasingly, I find myself needing to discard old views or air out newly formulated ones.

To air is human.

And what’s been bothering me lately is a question I hear more and more people asking. “Gee, did we have attitudes and allergies to food the way we have now in the old days?” The ‘old days’ being anything before the words “health foods” were introduced to our vocabulary.

Here’s the thing. I have no doubt at all that one percent of the population has celiac disease, a figure the Mayo Clinic came up with after considerable research into the causes and effects of celiac disorders.

So, let us remove that one from my curmudgeonly comments and move on to matters of preferences.

But wait. First, we must remove allergies and food intolerance, two very different things that Mayo folds together and says three percent of the population is burdened with. An allergy can be quite serious while intolerance has more to do with how food is prepared or if it has gone “off” or, for example, contains histamines.

My husband once continued to eat a suspicious piece of fish (I did say, no, no, but…) and soon after collapsed in our bedroom asking why I was screaming at him (he could not hear properly). After 911 was called, quite a bit of Benadryl injected, and several hours spent in the emergency ward where he turned all the colors of the rainbow, we found he had scombroid food poisoning caused by histamines in the fish.

Our doctor was miffed that we had not called him to witness his patient turning various colors, as he had not seen a case of scombroid during his 30-year practice. The rare condition is named after the Scombridae family of mackerel.

All the great villainies of history, from the murder of Abel onward, have been perpetrated by sober men, chiefly by Teetotalers.

Setting aside serious food-related afflictions, let me move on to preference, which is about as up close and personal a subject as one can debate. And why debate it? Well, in my case, I am a crazed cook, write cookbooks and articles about food, and absolutely cannot think of anything more pleasant in life than a gathering of friends around a table of delicious, simple food and wine that goes down easily.

That’s heaven, at least for me. So much is shared, so many inhibitions fall away, timidity might give way to the extroverted, lovers might meet, mothers and fathers might forgive — just about everything is in play when you savor a lovely tomato-from-the-garden-tart, or a frittata of spring artichokes, or just a good piece of cheese and a nice red wine (in which to dip homemade focaccia).

Yes, I dip. I taste the yeast in the bread much better after having dunked. I’m an idealist, Mencken-style: “An idealist is one who, on noticing that roses smell better than a cabbage, concludes that it will also make better soup.”

At the same time, anticipating such a gathering is, more often than one cares to assess, punctured by the medical information furnished by the guests. Tomatoes, says one, will cause a rash; butter pastry, says another, is avoided because of its fat; artichokes, says a third, have never been a favorite; and, according to another guest, a glass of wine, as recent articles suggest, should never be drunk at all!

To this I say, the objector probably eats more fat in one day than he or she can imagine —not having taken the time to read labels on processed foods. As for the artichoke aversion, it’s likely to be reevaluated when that particular guest savors the favorite torta of Fellini at Il Troia in Florence. On wine, I’m staying with the Mediterranean view that a few moments of in vino veritas never caused serious problems, aside perhaps from the realization that your wife or partner was sleeping with your brother or son or the local butcher. Wine can generate all sorts of unexpected conversations, if not confessions.

Just call me Mme. Mencken when it comes to finicky eaters or food fetishes and suppositions that have no basis in fact.

In fairness, facts these days seem to be anything one wishes them to be, and if you’re convinced that eating bread will give you yeast infections and that sugar is a poison (does that include the sugar in a ripe, juicy nectarine or in the delectable Italian uva cogliona of autumn), hey, it’s a free country. Think what you will. To yourself, when it comes to pushing away wine. And consider Mencken’s words, as always teasingly provocative: “All the great villainies of history, from the murder of Abel onward, have been perpetrated by sober men, chiefly by Teetotalers.”