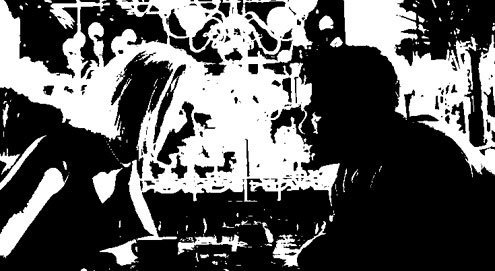 ating in New York is notoriously difficult. Some blame it on an overabundance of choice. There’s always someone better or more successful waiting in the wings. You can always keep looking. Others say New Yorkers are too busy for love. They tend to be ambitious and overscheduled, leaving little time for random encounters. But there’s on thing everyone agrees on: when you feel it, you feel it.

It happened to me at the Brooklyn Home Depot hardware store. I was working on a project that required door pulls, which I was told were on aisle 5. I wore scruffy work clothes and hadn’t showered. My hair was pulled back with a simple rubber band. I wasn’t at my best.

He was crouched next to the bin of silver galvanized pulls I needed. His hand was stretched into the box counting them out. I watched him thinking, “Please don’t take them all.”

I suspected he could feel me looking at him, so when he turned and looked up, I expected a glare. Instead he smiled.

“You need these too?” he asked.

“Not to worry. There’s plenty here.”

His eyes were soft blue and twinkled. He wore dirty jeans and a T-shirt with heavy work boots. His disheveled look translated into a rugged handsomeness.

“I’m building a roof deck,” he said standing up, instantly casual. “These will be the pulls on a hatch to get to the roof if there’s any leaks or problems.”

He kept talking, checking my comfort with his familiar tone. I smiled and listened intently.

“Let me show you some photos. I have them on my phone.”

The phone trick was an old ploy but I didn’t care.

It was a wonderful excuse to stand close to him as he flipped though the photos.

“If you need any work done, I’m a contractor. Here’s my number. We do more than decks, nearly anything you need we can do for you.”

He looked long at me, smiled, and walked away. I was left standing with my galvanized pulls, his number, and a jaw slightly dropped.

I went home and finished my project, thinking of him the entire time. It was obvious I had to do something. If anything could come of the chance encounter, I’d have to make the move. Only I had his number.

I pulled out my phone and sent him a text.

“Nice to meet you!” I typed with trepidation.

I put down the phone, stood back and waited. Within minutes he replied.

I was elated. Clearly we were attracted to each other. What a relief.

I thought hard and considered my next text. I considered a hundred funny things before settling on the one question that really mattered.

I held my breath and waited for his answer. If he said “no,” then I could clear my thoughts and get on with my day. If he said “yes,” it could be the start of something wonderful.

“Yes,” came the letters across the screen. “How about u?”

I smiled as I replied in the affirmative, feeling strangely silly and awkward.

“Thank you. I think u are very pretty” he replied.

“That’s a good start!” I typed laughing, looking at myself draped top-to-bottom in dirty clothes.

I exhaled and set the phone down, reflecting on the strange arbitrary nature of attraction. You never know where you’ll find it or when it might show up.