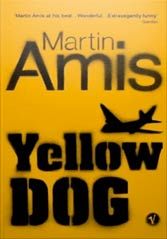 Amis’ gifts are known. He’s trenchant, confident, a word merchant of breathtaking skill, and a righteous one-man army against cliché. What ails this consciously asupple novel is the way it transforms those gifts into parody and dares all comers. It’s literary vandalism with a grin.

For starters Amis operates on what he calls “universal time,” which is to say a time appropriately separate from the world he mocks. His protagonist is actor-writer Xan Meo (married improbably to Russia, but that’s détente for you.) Xan lives in London and gets his head bashed in by a non-fan. This does a number on his brain and he begins to deconstruct himself, and others. “So-called ‘Renaissance Man,’” notes Russia, who gets this description of Xan from a clipping. That’s just it. The plot, also, is so-called.

“Yellow Dog” is landscape of characters colliding to earn points; tawdry columnist Clint Smoker toils lusciously over sexy emails and says things like “Birds want tall nippers: Darwin and that.” Then there’s Royce Traynor, a corpse on a jet lamely playing deus ex machina. And Princess Victoria, who has a secret. Amis’ modernism, pre and post, is dizzying. OK. Bravo. But enough already. Tell me a story.