Looking out over the spring Chicago skyline from the one picture window in my box-like loft, I couldn’t help but read a story about the return to Earth of two Russian cosmonauts and an American astronaut who’d broken all records by remaining in orbit for more than a year, an impressive but these days unimportant accomplishment. The twist in that tale was that the American had to hitch a return ride with the Russians, and lo and behold, they made it back safe and sound, landing in the Evil Empire all smiles.

What all three said was that up there, whatever was happening down here made little difference to them. They had other concerns, such as daily survival. So the state of the Russia-Ukraine conflict wasn’t breakfast conversation.

Except that the article I read on their return was published by the “Guardian,” a bastion of British political liberalism and a Russia-hating paradise from the moment British socialists discovered what Stalin was really up to, which they did far too late. By then, tens of millions were dead and all “Guardian” writers could do was apologize for being duped into thinking the Soviet Union was a worker’s paradise. 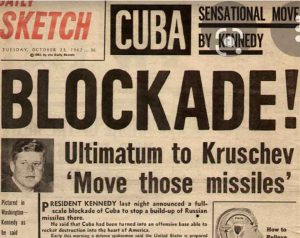 If you think these times are black, take a stroll through history.

The residual guilt has fallen squarely on the shoulders of Russian President Vladimir Putin, who is just about everyone’s latter-day Stalin. He’s not Stalin, not even close, but all it took was the Ukraine move to rattle old and guilty Western bones.

So it was that the “Guardian” couldn’t manage to celebrate the safe return of the space troika. They returned, yes, but to “a war-wracked planet.”

Is Beijing under siege, or Stockholm, or Chicago? Are armies busy patrolling the streets of occupied cities? Have whole cities been flattened? War-wracked? And the expression, it should be duly noted  is not the property of the “Guardian” al
alone, but of all mainstream mass media, which beginning some thirty years shucked crticial distance to plunge back into the sensational swamplands that all but defined 19th-century journalism.

Russia unwisely invaded Ukraine, provoking a dangerous ripple effect, but that, for now, is the extent of what the “Guardian” wants to bill as a global firefight.

Maybe it’s my age, but the exaggeration and hyperbole gets under my skin, same as it did with COVID.

For those of you convinced by CNN and social media that these are the bleakest of times (a few literally still locked in your self-styled anti-virus bunkers), please take a moment to accompany me on a swift (if oversimplified) stroll through recent history. I think such a stroll, no matter how cursory, may help rein in the “war-torn” hype that’s become a pox on many households — notwithstanding that, as always, war mostly boosts economies, America’s first and foremost.

A year later, in the autumn of 1963, Kennedy was assassinated in Dallas, Texas, an event that generated shockwaves. Should we stop there? Why?

The first step in this memory lane adventure was to set my time machine back a cluster of decades…pausing it first in the fall of 1968, a time I still remember vividly.

In short order, and without getting into the nitty-gritty, I felt like reminding the writer what had happened in the six years before 1968.

In the fall of 1962, America and Russia were poised on the brink of nuclear war. The evil Soviets had parked nuclear-tipped missiles in Cuba and insisted it had no intention of removing them. This in brief led to a nerve-shattering standoff in which the president at the time, John F. Kennedy, nearly ordered U.S. jets to bomb these missiles. The Soviets meanwhile had sent a volley of vessels with yet more missiles, which Kennedy responded to by placing a naval blockade around Cuba. For a long, long moment — long before CNN and social media — the vessels kept on plowing ahead to the blockade point, apparently determined to break. This in turn would have triggered attacks on the ships and a Soviet response. At literally the last possible instant, the vessels changed course and began sailing back the other way. Many books have since chronicled how stressful those times were, and how Kennedy resisted the pressure to attack.

The crisis led to a plethora of doomsday movies, including “Fail-Safe” and Stanley Kubrick’s “Doctor Strangelove,” a dark comedy any black dog would applaud.

This alone was as daunting as most of what has occurred in the last 30 months. It did not, however, end there.

A year later, in the autumn of 1963, Kennedy was assassinated in Dallas, Texas, an event that generated traumatic shock waves that never fully healed.

Should we stop there? Why?

In June 1968, Kennedy’s younger brother Bobby was shot dead in Los Angeles as he prepared to revel in winning the California primary that might well have led to his election instead of Richard Nixon’s.

But that was, in a way, no surprise since a few months earlier, the beloved civil rights leader Rev. Martin Luther King Jr. had also been assassinated, a killing that led Bobby Kennedy to make an impassioned speech about the need to rein in hatred. In three months, he was dead.

Satisfied? Don’t be. By 1969 an average of 400 U.S. servicemen were dying daily in undeclared war to stave off communism that many around the world thought was as illegal and reprehensible as Russia’s recent move into Ukraine. The U.S. used firebombs to annihilate enemy-filled villages, at times killing all that was previously alive, men, women, children, animals. These napalm raids, criticized but never stopped, were far worse than anything any other nation has concocted in war since. You need only search the web for images of children in flames. That war would not end until 1974, an ugly stalemate that scarred America’s do-good image.

In the first half of 1968, student protestors and workers took to the streets in Paris, in effect deposing the untouchable Charles De Gaulle. In August of that year, the Soviet Union sent tanks into Prague to dismantle a pro-democracy regime whose existence it found unsettling. Many believed this regime-toppling was merely a ploy ahead of a full-scale Soviet assault on Western Europe, which did not come but set the continent on edge.

I have left out the Middle East. In 1967, Egypt and Syria attacked and were repudiated by Israel in a pattern of warfare and terrorism that would set the tone for further wars and further terrorism in the years ahead. Many analysts were convinced a Soviet-Arab alliance would again attack Israel, this time forcing U.S. intervention and again triggering nuclear war. Only Egyptian President Anwar Sadat’s opportunistic shift to the West, and born-again peace efforts averted that scenario. A second Middle East war would follow in 1973, with Israel again demonstrating its military pre-eminence, this time shooting down most of the Syrian air force (filled with French-made jets) in a matter of hours.

Taking stock, the period between 1962 and 1968, which of course includes the early 1970s (with the Munich Olympic massacres) was among, if not the most trying in the last century.

Today’s events may borrow from the worst, but they have little in common with the global mayhem that dominated the mid-20th-century.

The difference between then and now is that media’s scope was limited and the broadcasting of bad-news urgency less pronounced. People were not made as fully aware of the blunt-force trauma around them. They had no instant updates and no way to expose their fears on a global platform. Hysteria and worry were internalized. People had no choice but to get on with their days. Alarmism lacked the many wellsprings it depends on now to keep international anxiety at a high point, whether regarding illness or war.

This is simply to say that if you believe the black dog is now everywhere and blacker than ever, and Vladimir Putin, the greatest villain in postwar history, think again.

Today’s events may borrow from the worst, but they have little in common with the global mayhem that dominated the undercurrents of day-to-day life in the mid-20th-century. We call these times the worst because we’re in love with anxiety, itself created in part by the nuclear menace.

My advice is to put the phone down, or limit your texting, and set aside time to read some history. It might confer perspective, and with it a sense of both fatalism and peace, the contradiction the species has always lived with and always will.