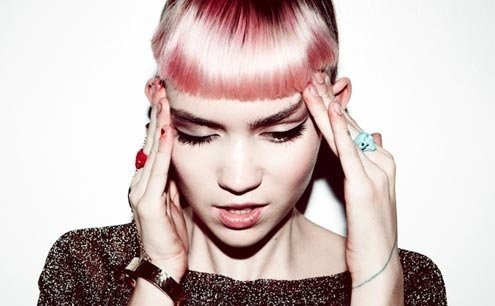 here are things in the music world beyond Whitney Houston’s unexpected death, the deranged spectacle of the Grammys, and betting on Blue Ivy Carter’s first spoken word. Hard to believe, I know, but the world keeps spinning even after Dave Grohl trades stage space with David Guetta and Deadmau5.

Walk with me past the inexplicable scrapheap of critical furor surrounding Lana Del Rey to our first example: Claire Boucher. The 23-year-old Montreal-based one-woman wonder has only been recording and performing as Grimes for two years, but she’s already made it from lo-fi cassette novelty to solo talent.

Her latest album, Visions (4AD), is the most well articulated of her three albums. Geidi Primes and Halfaxa had a lower sound quality to them, consequently sounding mysterious but also unintentionally dark (I prefer them for this reason). The ethereality was there, but the balance between voice and, say, drum machine was occasionally off. It’s remarkable. It’s also amateurish.

Visions suffers no such setbacks. Now signed to the reputable 4AD label, Boucher has stepped up the production and the message is coming through: She is no longer a victim of her own inconsistency and erratic tastes. Songs like “Oblivion” and “Symphonia IX (My Wait is U)” show she can stick with a hook even when she’s changing everything around it, that she can sing words you can actually hear, that she can make a traditional pop song.

These 13 tracks put her somewhere closer to the listener than the ambient calls of Julianna Barwick but stop short of Kate Bush’s transcendentalism. This is music to dance and sleep to in equal measure. That’s a rare balance, but that’s also simplistic. You’ve got to hear it to be sure.

Hearing it definitely isn’t enough when it comes to Berlin-based British sound artist Leyland James Kirby, best known as The Caretaker. The thematic arc of The Caretaker project is to explore memory and deterioration through age and disease (Alzheimer’s, primarily).

Kirby’s M.O. here: Manipulate, warp and filter pieces of Franz Schubert’s 1827 song cycle Winterreise so the haunting, blurred tenors and strings of old 78s evoke memory loss. The knot is the intent. Does he want us to experience memory loss ourselves or just think about it? Is it about what’s lost or what was never there to begin with? Is this an adequate attempt at any of these problems?

Excitement is an interesting conundrum French duo Air have been tackling since their early success with 1998’s Moon Safari. After widespread enthusiasm for their decidedly unexciting, highly stylized lounge music, Nicholas Godin and Jean-Benoît Dunckel then… kept doing it.

Results have been mixed. They alienated with 2001’s ambitious 10,000 Hz Legend, then won back with the colorful Talkie Walkie and similarly solid Pocket Symphony. Love 2 was an unwelcome pastiche of blandness.

Le Voyage dans da lune (Virgin) is not. Air’s seventh studio album is a score for Georges Méliès’ famous 1902 film A Trip to the Moon (from which the album draws its name and artwork), but it also works well independently.

At just over 32 minutes, it’s succinct. And yet, it is Air doing what they have always done best in drawing you into their world, wrapping their harpsichord tinkles and Moog wanderings and breathy vocals and broken lyrics around your ears. You’re encapsulated.

Anything less would have been a disappointment. We’re talking about space travel; it has to sound big almost by default. True to the quaint nature of a 110-year-old movie about the moon, Le Voyage dans da lune sounds splendorous without actually being so. It’s a neat trick, one of their best.