Chasing angels or fleeing demons, go to the mountains. • Himalayan trekker and author Jeffrey Rasley, on the role of monastic life in Nepal.

The monsoons have returned to Nepal, two months early. Though the rain is not ceaseless, it pours down hours at a time, violent timpani on tin roofs. We must shout to be heard. Kiran, my Nepali host in the Himalayan foothills, repeats, “This is not good.”

In these times, one would be hard-pressed to find much good in this world. COVID resurges, war rages, and prices skyrocket. In America, mass shootings are literally as frequent as sunsets (averaging one a day in 2022), women’s control of their own bodies is being taken from them state by state, and an entire political party insults a Supreme Court justice. Civility in American politics is dead. Democracy is following.

Surely, I thought, the remote Himalayan Mountains would hold some semblance of peace, space, and time to breathe calmer air. Fifty-seven hours of airports and airplanes – every minute commanding a mask – brought me to western Nepal, the Gandaki province, where the Annapurna range demands attention, and in Upper Mustang, the great mountain Dhaulagiri lords over all.

People plant rice and wheat and millet on mountain terraces, and in muddy fields, they thresh crops by hand with bamboo poles.

Here, poverty is king. A loaf of bread costs just sixty American cents, but then, many average Nepali live on one dollar a day. My friend, Kunsang Gurung, a teacher at Pal Ewan Namgyal Monastic School, earns 16,000 rupees a month, and her rent (two rooms, no bathroom) is 10,000. This leaves her 6,000 rupees (about $50) each month for everything else in her life, from bus transportation to cooking gas, food, clothes, and her phone. She is better off than many.

The hardships notwithstanding, my impression of Nepali people, having lived here twice, is that they are generally kind, patient, and forgiving. They see Western luxuries on the internet and dream, but there is no resentment. A minority own cars. Most take the buses. Let me correct that — most walk. The better-off own mopeds or motorcycles. People plant rice and wheat and millet on mountain terraces, and in muddy fields, they thresh crops by hand with bamboo poles. It is exhausting work.

Now climate change threatens to ruin this ancient rhythm. Even here, one cannot escape the inevitable. 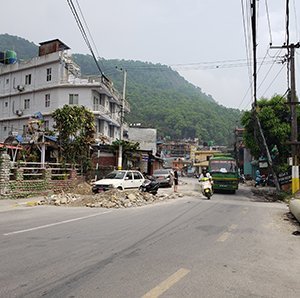 The only road west of Pokhara has more rubble on it than traffic.

Around the world, anger fuels right-wing hate in people who see social change as a threat. In Nepal, little is threatened. When you are poor and have nothing, you have nothing to lose. When the Nepali do get upset, the target of their wrath is usually the central government, which is widely known to be corrupt. Any Nepali will tell you so.

My friend Gopi spent what little money he had on a one-day round-trip bus ticket from the city of Pokhara to the capital, Kathmandu. The 14-hour ride left him and his friends with four hours to protest against the government. He tells me it was worth it. Corruption in Nepal is like gun violence in America. Everyone talks about it, but nobody does anything about it. Gopi says it’s time Nepal did.

From an early age, children are taught English, though the effectiveness of the education varies. Public schools afford few opportunities, and the education levels are low even when compared with other, non-industrial countries. The monastery and nunnery schools, along with private schools, which can charge $20 a month, are better. Those schools are better, the English more effective, but the classes are bare. Few have $20 a month to spare. Also, a good many children are homeless, cast out from poor families who cannot feed them. They roam the streets and beg. Lucky ones are pulled into the monastery schools, given a room and a meal a day, private donors sustaining them.

I write this on New Year’s Eve. Tomorrow begins the Nepalese New Year 2079. They understand the Western calendar, but celebrate their own, too. They also have skewed their time. In most places, time zones are measured in hours, whereas Nepal measures time in minutes. Thus, we are four hours and 45 minutes ahead of London. Nepal is nothing if not different.

I come for the mountains. They were here long before humans and will remain after we leave.

With all this, why come? It’s an easy question demanding a complicated answer.

I have friends here, though their numbers dwindle, as one by one and two by two some have scrimped and bartered and hoarded, and somehow made their way to Europe, never looking back. “There is nothing for us in Nepal,” they tell me.

Amala (“revered mother”) has three daughters. One has left for France, with Amala’s grandson. Amala is 65 years old and will never see either of them again. Another daughter will soon leave — forever.

I come for the value of kindness, which still pervades the hovels and shacks and dusty shops. There is no worry here of gun violence or police brutality (police are rarely about), or children being massacred in their classrooms, as shabby as they are. A note of peace pervades the place.

And I come for the mountains. They were here long before humans and will remain after we leave, which, at the rate we are devolving, will be sooner than even Stephen Hawking predicted, 100 years from now.

In two weeks, I head high, to rare air and majestic sights — to Mustang. It is my hope that the world looks better from up there. I will let you know.