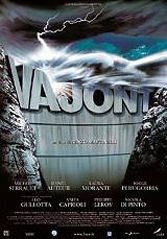 Director Renzo Martinelli’s fictional dramatization of the 1963 Vajont dam disaster is mostly unfulfilled potential. It’s an “I warned you” movie that never warms to its characters. Laura Morante is journalist Tina Merlin, who wrote countless reports in the Communist Party newspaper l’Unità cautioning that the building a massive hydroelectric facility in the unstable north Italian area was, well, suicide.

The fine French actor Daniel Auteil is engineer Alberico Biadene who with other pro-dam figures ignored compelling evidence until it was too late. Of course, the 750-foot dam broke and caused an estimated 2,000 deaths. Martinelli wants badly to point a finger at the Rome government but never fleshes out the figures or the issues to do so effectively. Instead, the emphasis is on gloom and conspiracy, Italian staples.