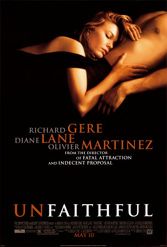 True, Martinez is hackneyed — but hunky French antique book dealers don’t exactly earn much cinematic space. The movie’s grist, or so seems, is what happens when Ed discovers the affair and confronts Martel. Lane holds up her end, but the rest of the plot plays out like the unsavory leavings of bad psychological thriller. Adapted from Claude Chabrol’s “La femme infidèle.”