To Bio or not to Bio 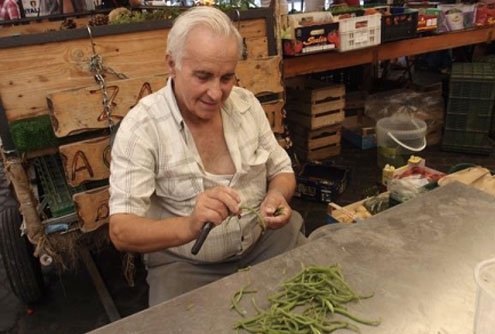 With local vendors, food becomes a matter of trust.
A

funny thing happened on the way to the market. I asked my husband, “Husband, why do sellers of organic products charge more than other producers when there are supposedly no added costs for pesticides, herbicides or genetically modified seeds used in the process.”

And my astute husband replied, “Because they can.”

The public has become obsessed by foods labeled “natural” or organic” even though at times they don’t really knowing just what they’re buying.

Don’t get me wrong.

I’m an organic foods fan. I’ve tended dozens of gardens and used only compost, mulch and organic fertilizers to boost my plants’ quality and their bounty. That still doesn’t stop me from wondering, for example, if the truffles so dear to my heart were rooted out by doggies fed only on organic kibble from a tree allowed to grow in unadulterated, organically certified soil. If not, can this tasty but questionable fungus be admitted to the organic club?

A far-fetched example, I admit, but how many other so-called “organic” products are really what they seem? And how many parents who fret and fume over their kids’ food being completely organic would be shocked at those labelers who deviously slap the words “natural” or “organic” on their products when neither one actually applies.

“Putting an organic label on ordinary foods can trick shoppers into believing that they are healthier, taste better and have fewer calories,” the Daily Mail wrote recently, basing its remark on a Cornell University study that asked 115 people to decide between two kinds of yoghurts, cookies and chips, with one labeled “organic.” Most of the test group flocked to the more expensive organic produce.

The result fit what’s been called the “health halo effect,” which implies organic labeling can influence people’s perception of a food’s qualities.

But debunking efforts are afoot. Peter Laufer, in a June 2014 Washington Post article underscoring the myths of organic food, noted an American Academy of Pediatrics report that contains a fairly direct statement: “In the long term, there is currently no direct evidence that consuming an organic diet leads to improved health or lower risk of disease.”

He also pointed out a number of potential shortcomings of organic foods:

• Organic produce fields are sometimes located near to non-organic fields, opening the door to cross-contamination. Pesticides in the air can settle on the organic products.

• Inspection processes to certify organic purity are fraught with discrepancies, either because of political influence or simply because an organic farmer might choose a less rigorous inspector over another who is more stringent.

I do read food labels, check certification, and when in supermarkets tend to gravitate toward the bio section. In general, though, I try buying my fresh food at small open markets or local grocery stores instead of larger markets that often mark up “organic” products. In Rome, while my local outdoor sellers may occasionally camp out under “organic” banners, what matters to me is that I know I’m buying produce that didn’t travel for days after being mass produced by large corporations that can “massage” labels to crank up profits.

Living in Italy lets you talk to farmers and sellers you trust. And while you can debate organic advantages for hours, the truth is that most fresh produce vendors are desperate to unload as much of they’ve brought to sell on any given day. It’s their livelihood. The matter of whether a fruit or vegetable is organic is secondary to them. Times are hard, and many small growers just don’t have the means to certify their farms as “organic” — even if they’re free of pesticides, herbicides or genetically modified seeds.

I adore my open markets. I love bantering with colorful vendors who enhance my days by offering suggestions for recipes and letting me taste fruits before I buy them. I like seeing the crusted earth on their hands.

Are those earthy hands organic? I don’t know.

Do I care? No. I’ve learned to put a limit on the suspicious scrutinizing of food.

If what I see is locally grown, tastes good, and isn’t outlandishly priced — maybe because it’s been slapped (questionably) with an “organic” label — I buy it. Even it’s not the most beautiful tomato “belle” at the vegetable ball.

The words of the American Academy of Pediatrics report are fine by me. It also seems to me that buying food would be a lot more fun if we weren’t so rigorously involved in trying to protect ourselves.

I still pick up eat things I’ve dropped on the sidewalk by accident. Sometimes, they taste better for their experience.