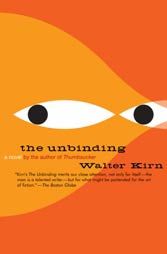 Kirn peddles 21st-century Gonzo, which he calls “revolutionary incoherence.” He succeeds well enough, but the matter at hand is “so what?” Some background. In 2006, Salon.com asked novelist and critic Kirn to produce an online novel, a serial story in the tradition of Dickens. He complied, spiking the tale with heavy doses Orwell, Hunter Thompson, Dr. Strangelove, and major helping of Chuck Palahniuk. These derivations bind the novel to its own conceit.

The “story” ostensibly centers on Kent Selkirk, employee of AidSat (“Always at Your Side”), a company whose implants monitor your every whim and cardiac spike. Selkirk, of course, isn’t Selkirk. Nor is friend Rob Robinson “just” Rob; he’s Big Brother in disguise. Meanwhile, putative love interest Sabrina Matilda Grant says things like “all free men are threats.” Oh, and there’s aging Colonel Geoff, a retired Marine shaman — Elvis-like — to Tom Cruise (the colonel “helped cook up several of the ‘new’ religions that the Pentagon developed to influence Hollywood.”) Constructed as a pastiche of blog entries, dispatches, emails, and FedEx screeds, the novel purports to nibble at a Web-scrabbled future, of “people programmed to seek attention electromagnetically.” In truth, this is conspiracy theory Americana recycled through cyberspace.

“I get tired of protecting America sometimes,” moans Rob. “I get tired of sifting the chatter to find the plots.” One can sympathize. Kirn lays down so much “noxious glop” about “liberated tractons” that his vernacular blender chokes. Too much information is part of Kirn’s point —“All of us are authorities on something.” — but his spacecraft is grossly overweight.