The Task of This Translator 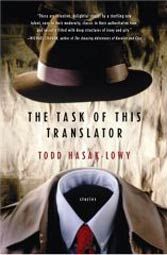 Reading Todd Hasak-Lowy’s deviously resourceful stories is a bit like watching a child try to force a puzzle piece into the wrong slot. Neurotic narrators tell you how much they dislike narration. Doctors disparage the drugs they dispense and move to China. Self-deprecating raconteurs can’t get enough of weird asides, as when a nerdy student of “Marxist literary theory” hosts a trash-talking Oakland Raiders fan named T-Dog (and his companion Lu-Lu, notable for “the surface area and volume of visible breast.”).

The quirky Hasak-Lowy, who teaches Hebrew literature at the University of Florida, is a dark transformer of Dave Barry conceits. In “On the Grounds of the Complex Commemorating the Nazis’ Treatment of the Jews,” a meek Jewish journalist and an American interloper come to blows in a Holocaust museum with German tourists in view. In “Will Power, Inc.”, a reporter enlists in a expensive weight-loss program that exists “in the unsupervised intersection of American wealth and weight.” In “The End of Larry’s Wallet,” a sinister send-up of media frenzy that connects ketchup, inner ear odor, and nuclear war between India and Pakistan, Hasak Lowy steps into the story to assure you of his own self-doubt.