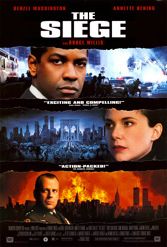 So very tempting to apply 9/11 hindsight to Edward Zwick’s flawed film, but let’s not. The military kidnaps a Muslim cleric and a local terrorist cell responds by blowing up a New York City bus. FBI task force boss Anthony Hubbard (Denzel Washington) is assigned to nail the Middle Eastern bad guys while NSA security operative Elise Kraft (Annette Bening), who grew up in Lebanon, speaks Arabic, and has connections in the terrorist netherworld, challenges his methods.

But the attacks escalate and martial law brings hyper-caricature General William Devereaux (Bruce Willis) charging into the city. Due process ends. Muslims are interned in makeshift camps. By the time Zwick pulls out Willis, the film has degraded. What keeps it interesting is the Kraft portrayal — she isn’t what she first seems and actually makes a decent effort to hint at the roots of extremist rage.

It seemed tastelessly clichéd at the time to suggest that “deplorable” Arabs could end up tossed in camps jointly run by the U.S. government and the military. The New York Times objected to “the demonizing of Arab characters…” and Variety found silly the idea of “young, sometimes bumbling fanatics bent upon bringing their struggle to American soil.” Bumbling fanatics indeed. The rest you know.