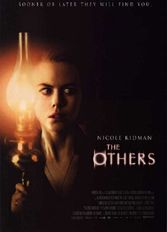 Chilean director Alejandro Amenábar does fairly well with this World War II ghost story. Grace Stewart (Nicole Kidman) arrives at her Channel Islands mansion with her two light-sensitive children in tow. Ostensibly, she’s awaiting the return of her husband — which seems dubious prospect from the start. So what’s Grace doing in the murky place among servants who seem other-worldly? She hired them, after all. But Grace, a terrified prude, gradually grows convinced they’re out to harm her children. Amenábar mummifies the days, building tension. He orders to Kidman to look consistently mortified. This wears thin enough to moot the kicker.