The Narrative of Arthur Gordon Pym of Nantucket 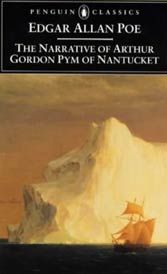 “Journey to the Center of the Earth” meets “Heart of Darkness” meets “2001: A Space Odyssey” meets “Alien,” only that Poe got to his netherworld well ahead of the others. He single-handedly refutes Columbus, carving an abyss from Antarctic ice.

Steer away from reason and good intention falters: grace gives way to chasms, giant birds, and hot, milky water among ice flows. Pym’s recounting of the South Atlantic odyssey of the brig Grampus is a study in what Poe calls “anticipative horror.”

There is murder, cannibalism, dementia, and religious presaging, all seen through a hallugenic fog. Critics have long pegged the narrative as religious allegory — Poe was God-fearing, and an alcoholic — but his Gothic accomplishment is in locating menace on a lost vessel before anyone thought up the proverbial starship. Borges adored it, and rightly so. A visionary story.