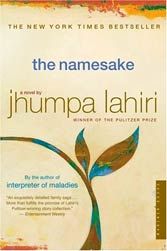 Inevitably, her next work and first novel appeared to exaggerated expectations, not quite met. For “The Namesake” repeats “Interpreter’s” fine strengths, but struggles with the longer format. The story line holds promise, following Gogol, that “accidental” namesake, from birth, to American-immigrant Calcutta parents, through his early thirties.

But the intriguing “namesake” sub-theme remains unresolved. Narrative falls to episode. Even her perhaps exaggeratedly colorful characters suffer the longer pace. The earlier work lightly sketched both Subcontinent immigrants and Americans as non-actors in their own stories. In “Namesake’s” 300 pages such passivity dulls reader interest, in spite of Lahiri’s elegant prose. A promising writer’s first, pleasantly-read novel, awaiting the next.