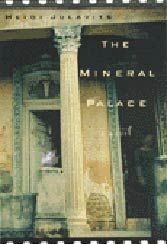 Julivits’ first novel is a study of human contamination in which closeness is bad news. Her narrator is Bena Duse, a married Minnesota woman who accompanies doctor husband Ted and infant son “Little Ted” to Pueblo, Colorado during the Depression.

Dust Bowl Pueblo is a receptacle of withered secrets — infidelities, incest, and suicide — that Bena claws at obsessively. To distract herself from her cheating husband and near-mystical doubts about her baby’s health, she takes a part-time reporting job with the local newspaper whose publisher opens a conduit into the city’s netherworld. Juicing into the wild, Bena meets Red Grissom, a local cowboy whom she first befriends and later desires.

Julivits’ poetic prose is at times overwrought but always tactile, whether concerning ailing infants or kisses. When Bena seduces Red, “She pushed herself against his mouth to taste a more clandestine part of him, the cow blood and the weakness, the deep snow, the taste of a man who could cut off parts of his own fingers, who could wrap the woman he loved in a tarp and lay her out on an altar of ice cut from a pond he’d swum as a boy.”

Ultimately, though, all closeness is ill-fated and the Depression a metaphor for despair. But once that despair is revealed (along with Pueblo’s depraved secrets), Julivits’ odd Western idles in the wretchedness of its own hard-knocks.