The king and I 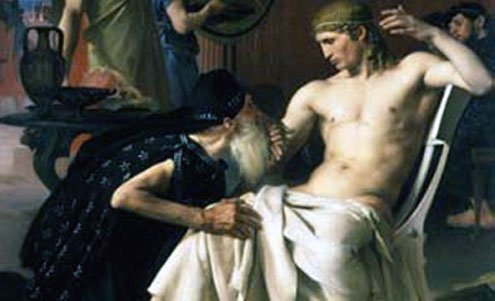 Priam wants to reveal himself as "stripped of all glittering distractions and disguises."
K

ing Priam of Troy has a problem. The body of his vanquished son Hector is being dragged back and forth tied before his very eyes.

It’s Achilles’ doing. Hector killed his best friend in combat and Achilles struck back. But revenge isn’t enough. Achilles wants literally to rub it in. Dragging dead Hector back in front of Priam’s castle is means to that end.

So Priam — the King Priam of David Malouf’s new novel “Ransom” — gets a shockingly novel and wholly un-kinglike idea. He’ll venture out of Troy dressed as a commoner. He’ll go to Achilles with gifts, beg for mercy, and humble himself for his son’s body.

With Hector mutilated daily, his image as king has lost meaning. For Priam, the time has come for “something so new and unheard of that when men speak my name it will stand forever as proof of what I was.”

Barack Obama has no castle. He does however face a dilemma that’s almost the perfect obverse of the fictional king’s.

He has already been inside the new and the unheard of. His ascent proved his person. His election “forevered” him. Dreams stood still to applaud themselves, Obama at their ephemeral core.

But history played a trick. Past stripped future of its prospects. Obama-as-Priam has no bigger new to offer than the novelty of his unheard-of election. Symbols have deserted him.

In going to meet Achilles, Priam wants to reveal himself as “stripped of all glittering distractions and disguises,” as a king-become-man; Obama, already a king-become-man, is seen by some as weak and objectionable because he’s been unable to make a larger distraction endure. “A dizzying fall from grace,” one historian calls it.

Not that Priam’s decision is applauded. His wife and court consider the ransom idea a mad one. “A king does not, in his own person, negotiate a deal,” implores an advisor.

Too late. Priam has found a mule-cart and blue-collar driver. If he fails at least he won’t be remembered with “one sad image” of a helpless king sulking in his castle.

Obama, meanwhile, is seen as having been unable to deliver on his anointment, which in United States is a kind of betrayal. It’s tantamount to selling a machine that then works less well than advertised, or, worse still, doesn’t work at all. Disappointment is an intolerable malfunction to those who’ve loaned dreams to help cure disillusionment.

Having sworn by an image his own court worked brilliantly to construct, Obama is now as much the past’s prisoner as his own man. That was always the risk.

Another neophyte president, also in trouble, generated an audacious summit — that was Jimmy Carter and Camp David in 1977. For naught. He eventually lost to the “newer new,” the far older Ronald Reagan. John Kennedy, struggling by mid-1963, was assassinated that same winter, martyrdom stabilizing a then-unsure legacy. Same with Abraham Lincoln, though the Civil War helped him repair the weakness of his early years. That repair was the something new.

Priam has always hankered “for form, for the rules.” Fetching Hector’s body, he thinks, will overturn his “stickler” side, which all known him by. He’ll finally be his own man.

Obama is also a stickler, erudite and cautious. But his propelling “Yes We Can” slogan was its own best stickler-breaker. Supporters didn’t so much elect him as permeate both slogan and man. His existence uplifted them collectively. Perched gods fall hard.

Priam for one doesn’t care about his fall. He’s human, not a god. Malouf’s Priam was purchased out of slavery as a child, his name changed by his captors to reflect the bargain. Priam means “the price paid.”

What he has in mind now is “possible because it is not possible.” It is so radical even that Achilles might “break free of the obligation of being always the hero” to accept it. Priam puts all his hope on chance.

Heroism’s weight is no doubt something Obama ponders from time to time. He has a fatalist’s enthusiasm. Rightly so.

He knows his “possible because it’s not possible” currency has already been spent. Nothing more can be tendered in that regard. The unprecedented has exhausted its course.

Stuck in his castle, a man-as-dream on borrowed time, “one sad image,” he must now forage for fresh elixir. But there’s no dead son to beg for, no truce in the offing.