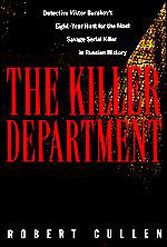 Cullen’s book is hard to find, which is a pity. Newsweek’s Soviet correspondent in the 1980s, he bypassed the abundant political literature of the period to write a true crime book (tempted, perhaps, by the success of Martin Cruz Smith’s novel “Gorky Park.”)

For eight years beginning in 1982, 53 bodies were found in Rostov, a Don River city 600 miles south of Moscow. Most of the corpses — young men and women — had their sexual parts excised. Cullen painstakingly tracks the 1980s-long odyssey of Rostov detective Viktor Burakov, who often fell on the wrong side of Communist authorities in tracking down the killer.

Homosexuality plays a role, so do trains and misleading small-town gossip. In a time of ideology, Cullen went on a fact-hunt. The result is among the better crime stories of the last two decades (made into an intelligent movie, “Citzen X,” with Stephen Rea, in 1995.)