The insolence of demagogues 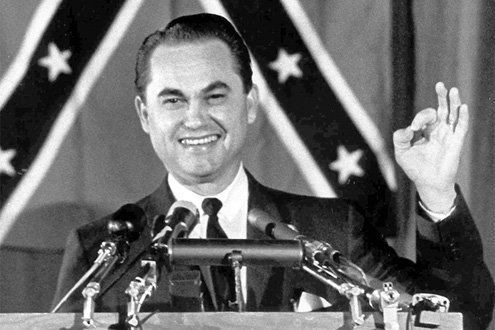 he insolence of demagogues — the phrase is Aristotle’s — is embedded deep in American political culture, no matter how much recent comments by presidential aspirant and loose cannon Donald Trump seem suddenly and foolishly to veer into vulgar territory.

Trump’s recent call for a federal ban on Muslim immigrants following terrorist acts by Islamic extremist met with a mix of criticism and disbelief among those who seek to maintain the barrier that ostensibly separates rhetorical resentment from the impulsive side of hatefulness.

There are hundreds of precedents for Trump-style thumping, but among the more instructive is the story of former Alabama Gov. George Wallace, a southern Democrat who ran for president four times, winning five states as an avowedly racist third party candidate in 1968. Republican Richard Nixon won that mean election, but it was Wallace’s snarl, and that of running mate Curtis LeMay, that received the lion’s share of attention. Wallace deplored government-sponsored efforts to help the country’s black population while LeMay thought using nuclear weapons in Vietnam was a feasible if not attractive option.

Understanding Wallace, even superficially, means going back to 1958, when he ran as a moderate and lost the gubernatorial race to an opponent who openly enjoyed the support of Alabama white supremacists. Wallace didn’t lose but was routed.

Aide Seymore Trammell later remembered Wallace taking him aside after the debacle. “Seymore, you know why I lost that governor’s race? … I was outniggered by [opponent] John Patterson. And I’ll tell you here and now, I will never be outniggered again.”

He ran again in 1962, this time playing to a regionally unreconstructed chorus: “I say segregation today, segregation tomorrow, segregation forever…” This time he won in a landslide, his segregationist approach hitting a raging populist nerve that would resonate for decades.

The shift in tone was part of a win-at-all-costs approach, one Nixon would take to extremes. Asked to explain how a man who once refused to join the so-called Dixiecrat walkout, a dissenting stunt by southern Democrats targeted at Harry Truman during the 1948 Democratic National Convention, could suddenly turn into a purveyor of vicious invective, he replied with brutal candor: “You know, I tried to talk about good roads and good schools and all these things that have been part of my career, and nobody listened. And then I began talking about niggers, and they stomped the floor.”

In 1963, he physically intervened to try to stop the desegregating of the University of Alabama, insisting he would not “surrender this state to Martin Luther King and his group of pro-Communists.”

A year later, during his first presidential run, Wallace got a taste of just how far his supporters might go — something he later said troubled him. Speaking in Cincinnati, where he had to get past protestors to begin, Wallace told a crowd that he would not be phased by the “little pinkos” who were “running around outside.” When the Red-baiting worked, Wallace pushed further: “When you and I start marching and demonstrating and carrying signs, we will close every highway in the country.” Only when the audience responded by seeming to move to the exits in preparation for their “march” did the suddenly defensive Wallace understand the potential harm and work to calm them down.

Trump is a veteran businessman (and entertainer) with none of Wallace’s insider political experience. He’s accustomed to boardroom bombast and to indulging outbursts of personal tyranny common to those surrounded for decades by yes-men and facilitators schooled in not interrupting the boss. Such men believe they rose through the ranks thanks to under-appreciated persistence and a pompous willingness to set aside reason in favor of impulsive if not irrational outbursts that are later rationalized as expressions of sudden if not brilliant illumination.

Wallace discovered that this aggressive approach, whether sincere or feigned, played well to dissatisfied crowds, since vanity is especially effective when spiced with devil-may-care conviction (his nearly 10 million votes in the 1968 elections came with victories in five states, Alabama, Arkansas, Louisiana, North Carolina and Mississippi, an electoral vote total that still ranks among the highest in U.S. third party history).

Devil-may-care Trump will not be outmuslimed, the latest brand of niggering. He says, in effect, segregation today, segregation tomorrow, segregation forever, but mostly to revel in the sound of his own loud and contrary music. He wants to close every highway in the country. He is not the first to try and won’t be the last to fail.