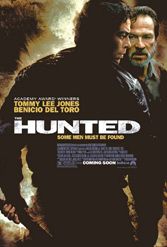 As agreeable as Tommie Lee Jones and Benicio Del Toro are to watch, they’re wasted badly in director William Friedkin’s formulaic Pacific Northwest chase movie heavy on macho and short on smarts. Jones is L.T. Bonham, an FBI tracker who must hunt down military-trained assassin Aaron Halman (Del Toro) in what starts fairly promisingly as a war of wills but descends rapidly into primeval grunting and rocky bluff knife-play. Del Toro is asked to display his “fear me, I’m fierce” look, but no more. Jones gets mournful looks and (for him) archetypal sarcasm. Naturally, Bonham was once Halman’s special ops teacher, a thick layer of psychology laid down to no avail.