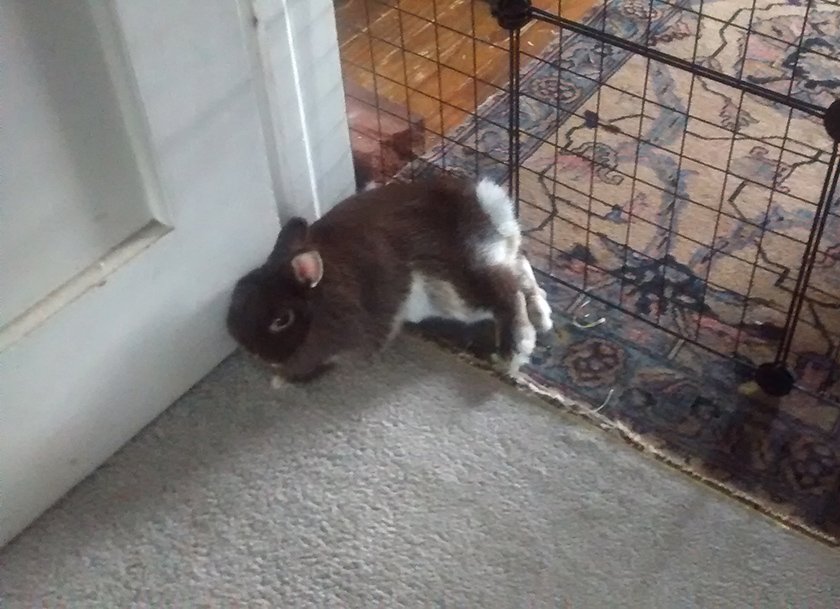 A rabbit may be ever so tiny, but it has chutzpah.
M

uchness, the rabbit who lives in my room, is not even three pounds — but he lives oblivious to maxims such as “might is right,” and has no notion that, if we were to judge him by size alone, his place among the beasts would certainly not be high.  Probably it would be in someone’s stomach.  Every day — that is, any time that he has reason to be unhappy with me (and whether he has reason or not, he is often unhappy with me) — he turns his little walnut of a face just so and glares at me out of those black eyes.  The glare is elephantine.

And then he has the temerity to thump.

Have you ever heard a rabbit thump?  The rabbit’s thump is a word, but not like our words, not like saying in English “I’m mad at you,” or saying in Bangla, “Tomar shathe rag,” (which is more or less the same thing, unless you feel a different grammar makes for an entirely different feeling — which sometimes I wonder, does it?).  No, a rabbit’s thump is a different matter.  It’s better than a word; yet, it is a word; only an elemental word, like thunder.  It speaks displeasure the way a door slamming speaks displeasure.

A rabbit’s thump is a different matter.  It’s better than a word; yet, it is a word; only an elemental word, like thunder.

Well, in the last few weeks — but really since the day before yesterday — Muchness has undergone a change in personality.

Now, for his age, his habits, his diet — so we can establish the cause of the change.  He is about three or four years old, which is to say neither young nor old, in rabbit years.  As for his habits, they are “Don’t touch me now.  Can’t you see I want to be left alone?” and “Oh, but don’t go away!  Just stay there and don’t touch me.”  And his diet consists mostly of hay, a lettuce leaf or collard greens or kale or parsley or some such green thing, a tablespoon of pellets, and water, and very occasionally a grape or strawberry.

And at about the day before yesterday, some kind of revolution happened in the inner country of my rabbit — and now it is no longer His Royal Moodiness who reigns but someone else.  Someone much needier, much friendlier.  A pet.

I am a little taken aback.  For three years (or four) my rabbit has spurned all my attempts at friendship.  Well, perhaps spurned is not the right word, because he was pretty clear that he wanted company and that if he did not get it he would go off his food and languish away under the dresser.  But unless the stars were all aligned and the moon was blue, he had little tolerance for petting and none whatsoever for being picked up. And now here he is following me from room to room like a puppy dog, sitting on the bed next to me, thumping at me if I don’t pet him, letting me pick him up, letting me stand him up on his hind legs.  Running around me in circles, honking.

He did do that before — run around me in circles and honk.  But not to this extent.

And to top it all off he has begun to smell like a skunk.  He emits a faint garlicky odor from his bum.  Especially if he is excited or stressed out — or perhaps staking his claim on something, like the bed which he jumps up on in the morning — he lets off this scent.  The scent of garlic.

And this is not the only change.  Oh no.

It is not enough to turn into both a puppy dog and a bulb of garlic at the same time.

It is not enough to turn into both a puppy dog and a bulb of garlic at the same time.  You have to pee on the carpet too.  I wake up in the morning, get out of bed, and see by my table or chair a little spot of red pee.  Rabbits often have red pee, that’s nothing alarming, but this peeing in my room, I do not like it.  He doesn’t pee in any of the other rooms. He doesn’t pee on the bed he loves to sit on — only on my carpet.

The worst explanation is the first one to entertain, so I entertained it.  Maybe he has a brain tumor. I called the vet and left a voice message, saying, “Look here, my rabbit’s going bonkers.”  Today the vet (who I’ll call Dr. Badger, because believe it or not that is very close to his real name) returned the call and said, “Is he neutered?”  He isn’t neutered, so the first explanation the vet offered was testosterone.  That had occurred to me, but at three years?  “Isn’t that a little late?” I asked.  And what did Dr. Badger do?  He laughed.  His next explanation was a bacteria which, very rarely, can cause a surge in testosterone.

There hasn’t been as much peeing today, so I’ll cross my fingers, maybe take him to see Dr. Badger, and wait.  In the meantime I will sit here and practice the art of thumping.  And if there are any psychotherapists among you, I suggest that you recommend it to your patients — the thump declares the great value of the thumper and thereby eliminates all psychological complexes.

About the Author: Naeema Naqeeb