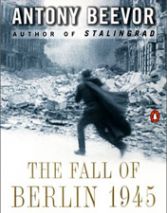 Beevor’s chilling encore. It’s January 1945: the emboldened Red Army makes for Germany. Built into the advance is a yearning for revenge among drunk foot-soldiers and for political advancement among Soviet commanders, each eager to outdo the another for Stalin’s love. Berlin is his obsession. The atrocities committed by advancing armies against civilians in East Prussia are primordial; two million German women were raped — but the vilified Nazis, discredited by their own whirlwind, couldn’t cry foul.

Soviet soldiers, in turn, faced summary execution at the slightest hint of disloyalty. Soviet Marshal Zhokov, writes Beevor, “was the least sentimental of generals” who “sent the infantry through minefields which had to be cleared before he unleashed his tank armies.”

Berlin’s fall is rendered with tragic elegance. Read together, “Stalingrad” and “The Fall of Berlin” are tales of valor, madness, hatred, and expediency, rationalized under the rubric World War II. Corpses from the Berlin battle are being dug up 60 years later, bones that won’t go away.