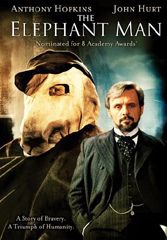 Surgeon Frederick Treaves (a muted Anthony Hopkins) meets mistreated circus freak Merrick and sets out to help him. It’s a medical Pygmalion tale (filmed in black and white) but with none of the sexual contingencies or rewardingly cheering outcomes. Astounded by a kindness he cannot fathom, Merrick mumbles thanks and gradually accepts help from Treaves’ housekeeper Mrs. Kendel (Ann Bancroft). But Treaves’ “case” is envied and assailed. Chased from the house, hunted. Merrick turns to face his accusers with these lines: “I am not an animal! I am a human being! I… am… a man!”

The scene, with Merrick pinioned against public urinals. ranks among the most harrowing and illuminating ever put to film. Lynch is praised mostly for his eccentricity, but only a very wise and good man would know to handle such uplifting sadness. This is in the highest tradition of expository art.