The Effect of Living Backwards 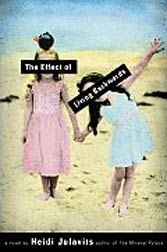 Toward the end of this surreal story, Alice Vickery Plourde (if she’s really Alice) confesses: “This story is meant to make you realize that your chances of happiness in this world are terribly slim if you lack a fine imagination.”

Julavits has no such dilemma: she’s a joker, infinitely clever, and addicted to riddles and ruse. Parsed laconically, the novel is about sisters Alice and Edith hijacked in Morocco on their way to Edith’s wedding to a noble Spaniard — hilarity á la Buñel. In another sublayer, Alice is enrolled at the Swiss-based International Institute for Terrorist Study, which specializes in role-playing and is split into two factions, Incursionists and Brain Worms, represented by half-brothers Bruno and Pitcairn — who also face off in the hijacking.

The roller coaster ride is a meditation on sibling rivalry, personal identity, and the limits of narcissism. It’s also an obliquely glowing literary response to 9/11. Alice’s wonderland is a series of connected sets. Her Alice did not grow up in the United States, where “caution is the main course of study.” Instead, she’s a lightning rod for that anti-caution known as life. Say what you will, this lady’s an alchemist.