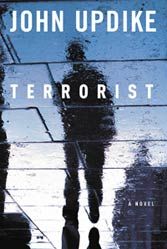 Updike ill-advisedly sets out to place terrorism on his literary CV and comes up with a clunky thriller that is equal parts harangue and parody. Teenaged high schooler Ahmad Ashmaway Mulloy (yes), half-Egyptian, half-Irish, buys into New Jersey-stoked jihad and is gradually sucked into a September 11 look-alike plot.

Updike is clever enough to know he’s assembled a potpourri of caricatures (Ahmad’s hippy mother, a Jewish guidance counselor, a black choir singer-turned-hooker named Joryleen and her boyfriend Tylenol, a Lebanese jihadist who knows the American Revolution by heart and an undersecretary of Homeland Security who’s in love with her boss), but can’t resist peevish lectures soaked in suburban cynicism (“decency cuts no ice in the state of nature.”)

The mood is overwrought and female anatomy too often “meat-colored.” In the end, it’s hard to choose between “global Satan,” “crazy Arabs,” and pierced-eyebrow hookers — all unconvincing. At one point Teresa, Ahmad’s nurses aide mother, tells her son: “What is it the French say? Ça va sans dire. It goes without saying.” French quips in blue collar New Jersey? Time out.