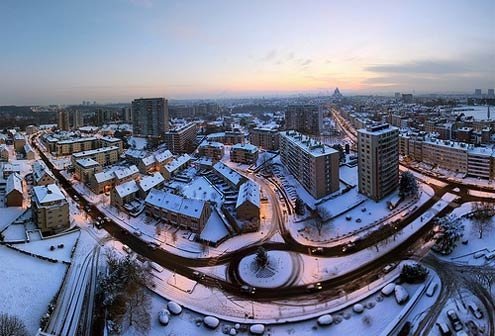 Brussels is at times Midwestern.
A

decade ago I landed in Brussels on a one-way ticket after leaving behind the American Midwest.

The plan was to travel Europe until I couldn’t anymore. I would find a job, save money, then travel some more. I saw my life stretching into the future as a series of obtainable adventures in which I played the heroine: I’d be strong, shrewd, and travel smart. I made no plans because there was no country in particular I wanted to visit. I only wanted to travel, to feel myself in motion free of direction.

I went to Brussels first because my good friend, who also had just left the United States on a one-way ticket, had moved there recently. Though she hadn’t been in her new apartment with her new roommate for a week, I showed up and began sleep on their living room couch. It was a cozy way to begin the trip that was the rest of my life, and I wasn’t in a hurry.

Brussels in September fluctuates between divine days and autumnal ones. The grey clouds begin rolling in and remind you what winter has in store. The living room I slept in was adjacent to my friend’s roommate’s bedroom that had the apartment’s only bathroom and shower. My friend and her roommate had known each other vaguely, and the arrangement had been organized through a mutual friend.

September trickled away to October, and I decided it was time to take my first trip out of Brussels and into Europe. Something easy. Someplace close. I went to Holland for a week. In Amsterdam my wallet was stolen. Inside was my debit card, my only access to my cash.

If there’s one thing I knew about traveling before I began my trip, it was that it requires money. Not necessarily lots of it, but enough to get you here to there, get you sheltered, and get you fed. Without money I had nowhere to go but back to Brussels, to my friend’s apartment, where I announced my bad news. Had she and her roommate known how long it would take to get a debit card from my small U.S. bank, they might have taken my return more solemnly.

I began the process quickly. I waited to for the form in the mail, filled it out, then faxed it back to Michigan. I then had to wait again until the card arrived.

The money that was frustratingly out of reach represented eight months of diligent saving. After I had formulated my plan of leaving the U.S. for Europe, I began washing dishes until I was promoted to waiting tables. I worked overtime. I hardly spent anything.

The savings would last me to the following summer when I paid rent plus one month’s deposit on an apartment near Termini Station in Rome. In those days, the dollar-euro exchange rate was an even one-to-one, which may account for why my funds lasted so long. Yet most of the reason was an inherited cheapness and an aversion to eating alone at restaurants.

In Brussels, October became November. The sun became a rare sight, a brief apparition between low heavy clouds usually on the verge of dumping rain.

In the meantime, my friend ran out of money. Though she was looking hard to find work, it’s notoriously difficult to find in Europe if you lack the proper EU documentation. It fell onto my friend’s roommate to feed us, and she did, for which I’m forever thankful.

Thinking back, I’m always surprised I wasn’t kicked out. My friend’s roommate taught English and seemed ambitious. She must have seen me as listless as she passed me sleeping on the couch every morning on her way to work. My own ambition must have appeared slightly off the mark for the aimlessness of it, as it seemed to most adults‚ particularly those I left behind in Michigan.

Fed up with my dreary situation and the dreary Brussels weather, my imagined trip began feeling teasingly out of reach. When the card arrived at last, I tore it open the envelope. We all celebrated with drinks.

The next day I bought a train ticket to Lisbon. In a few more days I was headed south, drawn by promise of warmer weather, sun, and sea. The trip that had gotten off to such a shaky start had finally begun, albeit a few months late.