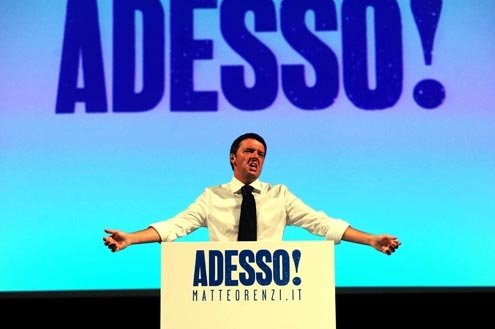 The result of this vote means Matteo Renzi is lurking.
W

elcome to student council Europe as junior high. First, Beppe Grillo transforms “mad as hell” Italian national elections into a rage plebiscite, mocking the man whose party he outperformed as a “dead man walking” and a “stalker.” After which the German Social Democrat seeking to oust Angela Merkel quips that Italy has elected “two clowns,” referring to Grillo and resurgent Silvio Berlusconi. Enter The Economist, which should know better, gassing the flames with a “Send in the Clowns” cover story featuring, who else, Grillo and Berlusconi. Not to mention the conviction of Cassandra-inclined Paul Krugman (sure the known world was ending in September 2008) that a Grillo-Berlusconi surge will “destabilize not just Italy but Europe as a whole.”

Junior high is much about hormones and hyperbole, which in usually get left behind for adulthood, or a semblance of it. The only question is when.

One-trick pony Grillo, who has known only to taunt since his blog took flight eight years ago, is sticking to that approach for now, cornering “dead man” Pier Luigi Bersani, the humiliated center-left chief whose survival depended on winning. Media-loathed Berlusconi, settling in after pulling off a Houdini act, is watching others eat crow and hoping to play eventually play broker. The Economist and Krugman, keeper of upscale theatrics, are bidding for a few extra readers. Nothing new.

The only tangible problem is that seventh-grade antics don’t get Italy a government, and one is necessary, however short its duration.

Grillo, an ideal leader for the disenchanted (and they are many), has no pedigree to follow through with what amounts to a minor electoral miracle. Instead of working within the system to overhaul it, he’s determined to begin inveighing on behalf of his next campaign, convinced he’ll do even better.

Don’t count on it, since seventh grade leads to eighth, which for some leads to thoughts on how to put aside mischief in favor of belonging to a team, or identifying with one.

As eager as Grillo Italians are to rein in a government they think has spent decades pick pocketing them, most also believe in order within disorder. Mischief, insults and clowning all have their time and a place, an art Berlusconi long ago mastered; he knows when to attack, when to play dumb, when to appear humbled, even though he feels none of these things. He’s what’s commonly called a politician.

Grillo’s most astute short term move is unfortunately the only one he doesn’t know to play: let the humbled parties come to him, eviscerating them piece by piece, but from his new and emboldened position from within the Italian beast’s giant belly. On paper, he has a chance to bid for and advance an important legislative agenda, including vital electoral reform.

But that would mean less ranting and more pacification, which his starry movement insists contradicts its stated purpose: to loudly take down the fat cats. Why bother with parliament when you’re suddenly the single largest party in the land? Though junior high is all about such posturing, it also comes with risks.

Bersani’s chastened Democratic Party will likely turn to the fresh-faced, not-yet 40 mayor of Florence, Matteo Renzi, for the next vote (before summer, or immediately after). Since some of his thinking is in line that which fueled the protest vote — including smaller, cheaper government, voting reform, Green priorities, more equitable wages — his campaign will more than likely siphon votes from Grillo, whose screaming and shouting is already beginning to tire out his more practical backers.

The impractical ones, Grill included, believe this vote was merely the tip of the iceberg, and that a subsequent one might make them lords of the percentile circus. Why leverage 25 percent when you might be on the way to 30, or even 40? But what’s a circus, any circus, if you don’t know to manage it, keep its books, and insist only on releasing captive tiger and bears? The answer is a feeding ground for suddenly free tigers and bears.

The 1990s Northern League, though it never reached Grillo’s rarified heights, fell back from its 14 percent peak when it over-talked, overreached, and over-insulted. Hoarse, it lost its sheen, finally disappeared into Berlusconi’s rightist folds.

Though there’s no comparing the national rage of 2013 to a band of green-kerchief secessionists, there’s a lesson for Grillo: that using electoral success to fix what you’re convinced is broken is the best way to neutralize the tangle of clown clichés (and Economist-style sensationalism) laid out for Italy to trip over.

The junior high student council vote — with the students taking over a part of the school — is over. Now it’s time for the insurgents to start handing out its new-day books, even if it means annoying if not ostracizing the hated old school teachers. If Grillo wants to run the show, or shut up the clown-talkers, he needs to set social media aside and butt heads with the “dead men,” to prove he’s politically alive.