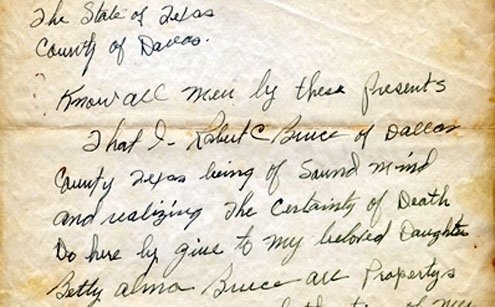 A holographic, or handwritten, will could cause problems.
Y

our American father who owned a farmhouse in Umbria has passed away. You sit back, assuming Italian law will regulate the distribution of the estate. “There’s nothing to be done,” you say to yourself.

But you’d be wrong. Under Italian law the owner’s law of nationality governs the distribution of property owned in Italy.

Whoever administers your father’s estate will have to look at U.S. state law, as it is state and not federal law that governs the distribution of estates.

That general principle makes it easy for those who resided in only one U.S. state before coming to Italy and who have no connection with any other state.

Otherwise, the applicable state law would depend on where the individual last resided or where he or she maintained a residence. Another determining factor would be the state in which assets are predominantly located.

Italian law also provides those who execute a will with the option of choosing to apply the law of the country where the will-writer resided at the time it was drawn up. But be careful: That choice works only if the person still resided in that country at the time of death.

The rules are a bit different for anyone with dual U.S.-Italian citizenship. Italian laws of “forced heirship” protect heirs who reside in Italy at the time of a death, entitling them to shares of the estate. Anyone contemplating acquiring Italian citizenship should be aware of this and have their estate plans reviewed before applying.

For those with property in Italy, uncertainty multiplies. This makes it all the more important to have a will. In addition to selecting which laws to apply to the distribution of the estate, a will also:

In almost all jurisdictions, including Italy, those with a will are permitted greater distribution of estate than those without one.

A word of caution: While Italian law goes out of its way to validate the form of will, many U.S. states do not recognize holographic, or handwritten, wills.

Therefore while it’s fairly common for someone residing in Italy to possess only a holographic will, be advised that the document may not be recognized in the U.S. I usually suggest that a U.S. citizen who has assets in both the United States and Italy adopt a U.S.-style will. Upon death, the U.S. will would be submitted for approval to the applicable state probate court. Once approved and authenticated, the will would then be recognized in Italy to allow for the administration of the assets located here.

All in all, the Italian and U.S. systems work together well but planning ahead can avoid common pitfalls.