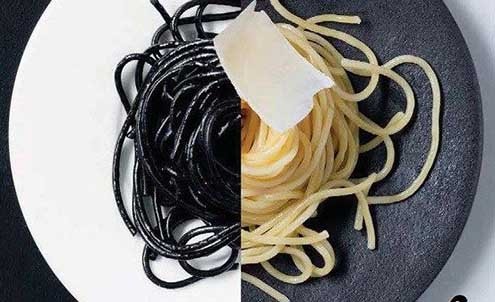 Harping on new, outrageous dishes has left cooks confused and at the mercy of trends.
F

or decades, I’ve written about food. I’ve done it for this magazine and for many other publications.

And each time I’ve written a piece, I’ve felt as if I was betraying my husband’s (and my own) very strong belief that all food writers might be better off seriously studying their navels or taking up the art of macramé or origami, or even better, working nights in a skid row soup kitchen, which if they chose to write about it would be more honest food for thought.

Maybe I’ve been in the world of food assessment for too long. Maybe it’s getting to me that a reviewer’s opinion of how food looks and how different it is doesn’t by itself lead me to the restaurant under review. It’s reached the point where I’m not even sure many critics even know what a classic dish is supposed to taste like.

Certainly, in France, where heavy cream is stirred into a spaghetti alla carbonara, one has doubts about the critic’s praise, and yet that praise comes.

It seems to me that restaurant dishes were once judged based on whether they made your tummy happy and left you with a fond memory of the evening (with no burps). Not any more. Now, it’s often about how artfully the pomegranate seeds were arranged within the firework design of balsamic reduction.

If the pleasurable event called dining out was once strictly between the cook and the eater, it now appears that the critic is king. Chefs are often intimidated as a result, pushed into being innovative and pressed to make something that will catch his (or her) majesty the critic’s eye.

Never mind the taste of the dish so long as it can sport a new label and impress the critic. It might be, say, a combination stroganoff/Southeast Asian curry/lobster bisque. But if the critic gives it 11 thumbs up, so, sadly, will his follow-the-Tweet readers. It’s about trends, not food.

Ask yourself this: why do food writers often seem stretch for new similes and metaphors — some exaggerated if not downright ludicrous — to describe foods that simply taste good? Or delicious? Or satisfying? Overwriting, like reviews themselves, are trendy.

A reviewer may no longer just state that the lasagna was light as air, lovingly baked and just like mamma’s. No, our critic must instead seek descriptions that might be more at home in a racy potboiler: the unctuousness of the pale, eggy, satiny pasta was counterbalanced by a sensuous scintillating sauce of titillating tomatoes with a rough and tumble mélange of biologically correct veal, pork and beef, assiduously assimilated in the manner of a brilliant sauce Bolognese.

And you think I’m making this up. I’m honestly not sure I’d want to taste a concoction packed with such hyperbole.

A reputable food guide recently decided to make a point by omitting any reference to cuisine in its reviews, describing only the décor and ambiance of the establishment. Heartbreaking.

On the other hand, pity the poor critic. He-she, too, is under pressure to come up with hyperbolic twists and turns. Maybe the public needs to trust its own intuitions about what good food is and where to get it, keeping a skeptical eye on gushy reviews.

Maybe just getting back to basics is the key to honest and influential food reporting. Quote the cook (I prefer cook to chef) and let the creator and the food be the stars, not the reviewer.

It also might help, when writing at all, to remember that wonderful phrase in Roman dialect, Parla come magni. Speak as you eat.

Or the American one, KISS, “keep it simple, stupid,” which might suggest keeping both unctuousness and scintillation at arm’s length.