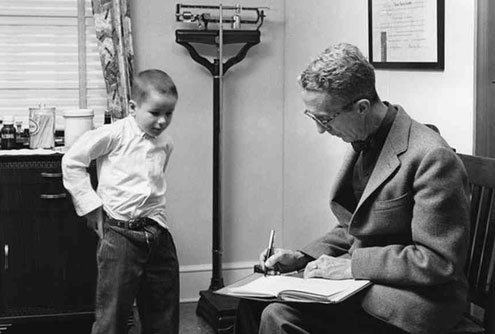 Emotional intelligence is what doctoring is all about.
S

ocrates, feeling unwell, chased mice. A distraction. Rousseau, feeling pain, wrote about the rights of man, hoping maybe someone might see them as his own. Copernicus, when afflicted with a tummy aches, dreamed achingly of Ptolemy, who dreamed back, leaving them both with inflamed joints.

Feeling unwell makes intelligence useless, since intelligence is bored in the body of the ill. It seeks a host with better nightspots.

Which brings me to doctors, a species so maligned — at least in the United States — that they’re lumped in with Socratic mice: necessary but greedy distractions.

You’ll say: “Why can’t he just say he doesn’t like going to doctors? Is there something wrong with him?”

Yes and yes, but that’s a story for another nightspot.

Pain can panic, and when it does phone calls and an appointment usually follow. My appointment leads to a long walk on a rainy morning to a Rome clinic and a meeting with a stranger, a doctor, who existence immediately presents two dilemmas: first, I must speak to him in Italian (not true technically, since he understands English, but that’s too rational); second, I must consider how to pay him, in camel milk or with my third-born, since I’m insurance-less, one among millions of such creatures, some of whom actually live overseas.

For this reason, and also because of my plague, I haven’t slept. Not a wink. I walk through the morning rain like a blind frog headed for a sinking lily pad. Or so I imaging.

I also imagine the doctor as stern and distracted and perhaps even on the phone with more deserving patients, maybe even on a very smart phone, which I don’t have, since, you’ll remember, intelligence has deserted me.

I suppose myself terribly ill, an inflamed planet about to vanish from no one’s radar.

By the time I reach the doctor’s office, a modest annex that flanks a 19th-century villa, I’m in a funk.

But what happens next is why I’m writing, in hopes Socrates, Rousseau, or just mice, might be listening.

The annex is empty, a cove in a rain forest. In the cove, in a nice room, is the doctor, and the doctor, it turns out, is a pleasant and direct man who speaks with a precision of mind and heart that catches me off guard.

My pain-induced worry is snapped from its reverie by his smile. The mice, awaiting a bull rush, don’t get it. I’m relaxed. I confide my hurt. I expose my belly. I blink many times to make myself aware that I’ve stumbled onto something rare: a physician working away from antiseptic corridors and their hubbub, the source of many anxieties.

On a wet day, I’m instead far from the madding crowd being tended to, and tending is a precious verb. It’s modern doctoring mixed with emotional sensibility, together factoring in anecdotes and chattiness that — and here’s the trick — soothe the greater pain. It’s a gift some physicians once brought their craft when health was believe to possess its own intelligence.

I mention America; he mentions his background — born in Philadelphia, a reverse immigrant of a sort, and now a surgeon in rainy Rome. I suspect he’s the kind of man Rousseau would have appreciated for protecting the rights of other men, and women.

At the end of this session my pain was no less unhappy, but my soul, pain’s upper house boss, felt great contentment. Here, it thought, was a listener, an advisor, a potential plague-buster. Pain is hard to please. He did.

Then came payment, the second and more forthright dilemma. I’d stopped at a machine, picking up camel milk and a deed to sons and daughters I don’t even know.

He walked me to the front of the annex, where a lone receptionist stood, ready to fill out paperwork. “He doesn’t pay,” he told her. And he shook my hand.

Walking home, I met Copernicus and Ptolemy arguing at the local cafe and I told them the story. “Write it down,” they exclaimed in unison, so I did.