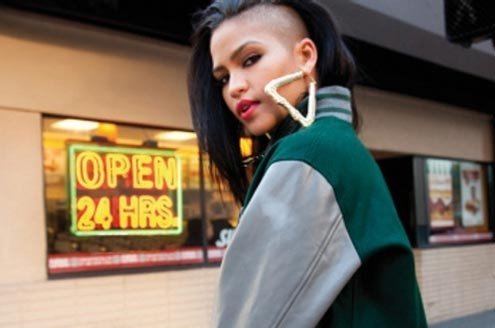 pril has been a predictably star-studded month and I’ve had to rewrite this column a number of times. From David Bowie to James Blake to The Knife to Jai Paul, there’s been no lack of new music to love. Apart from those deserving stories are two additional staples of very different kinds.

The first is a pleasant surprise. For what feels like forever, Cassie has been the avatar of unfulfilled R&B promise. Making her mark in 2006 with the featherweight melody that drove “Me & U,” the artist better known as P. Diddy’s girlfriend teased release date after release date for a follow-up.

In half a dozen years of waiting, she instead dropped two officially released songs and a bounty of unofficial demos and leaked cuts that helped fuel an increasingly cult fan-base. When it came to capitalizing on momentum, Cassie either couldn’t or, just as likely, refused.

With the free mixtape RockaByeBaby (self-released), Cassie returns in an official capacity with a slightly tweaked persona. Instead of the oft-vulnerable, standoffish persona of her youth, Cassie comes more aggressively from a hip-hop direction.

The mixtape doesn’t just feature her own bars (as on the title-track), it also lines up a litany of rappers from all walks of life: high-profile cameos from Wiz Khalifa (“Paradise”), Pusha T (“Take Care of Me Baby”), and Rick Ross (“Numb”), as well as appearances from Fabolous, Meek Mill, and Too $hort to pad out the tracklist.

Taking this angle with these names is understandable to boost the profile of the tape and generate some industry buzz, but the great lesson reaffirmed on RockaByeBaby is that Cassie is R&B’s quintessential minimalist — she thrives in confinement. The most alluring songs here (“Numb” and “All My Love”) join a deeper thread of career should’ve-beens (“Activate,” “I’m a Lover”), showcasing her appeal when she’s barely singing at all — over spare beats with plenty of negative space. The hook of “Numb” puts it more succinctly: I make music to numb your brain.

She’s not a Mariah Carey or an Amerie; she’s barely Jhene Aiko. Told for years her voice was her Achilles heel, Cassie took to coaching for the 2012 single “King of Hearts,” and you can hear her reaching to keep up with Jeremih on “Sound of Love.” Good for her, but it’s a mistake to think that this “thinness” of vocal range is a handicap. If anything, it’s Cassie’s lack of dynamism that makes her such a singular, vexing talent. The riddle goes on.

The second staple, meanwhile, is no surprise. France’s Phoenix is a main menu item in the diet of those hungry for irresistibly catchy 21st century pop-rock. If a factory existed for music like this, the Versailles quartet would be the blueprint. I’m still hearing “1901” and “Lisztomania” from 2009’s ubiquitous Wolfgang Amadeus Phoenix in places as varied as high-end boutiques and my local grocer. In short, the band has made it.

Entertainment! (Glassnote) is the quartet’s fifth and latest album. The bad news is that it has nothing quite as immediate as “1901” or “Lisztomania.” Like Cassie, Phoenix sounds labored amid the noisier nature of the production. Whereas before their tracks felt simple, tight and exacting because the band used less, Entertainment! emphasizes the novelty of more.

The buzzing of synthesizers sound on everything from “The Real Thing” to “Trying to Be Cool” to closer “Oblique City.” It distracts and detracts from the simple joys of the songs themselves, which is too bad.

Even so, repeat listens show the reliable old masters of pop song-craft hidden beneath the busier production. The opening title cut reminds me of David Bowie’s “Little China Girl,” and they’ve put their best foot forward with in its chiming melody and swelling chorus. “Drakkar Noir” also sounds as polished and straightforward as the band has ever been.

Entertainment! is, then, not the career high watermark of its predecessor, but it’s hardly an abject failure. Repeat listens can still reward in the same way as previous efforts and there remains plenty of room for these ten songs to be added to your diet of rock staples. Eat up.