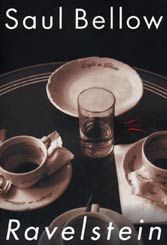 Bellow’s last novel, published in 2000 at age 84, is engagingly authentic. Aging author Chick (Bellow) promises to write a memoir for a younger friend who’s dying. The friend is best-selling political philosopher Abe Ravelstein (in real life Allan Bloom, Bellow’s academic ally) who divides his time decadently between Paris and Chicago while spewing thoughts about life, death, BMW interiors, Michael Jordan, and anti-Semitism to Chick and other friends and suitors. Ravelstein is both a “Sumo champion representing Platonic metaphysics” and a gossip-engrossed straight-talker with an erotic bent. Bellow is tender toward Abe, the tall gay Jew from Dayton, and bantamweight Chick, Montreal-born like Bellow. Like so many Bellowians, Chick (“a serial marrier,” now seventy-something) is a romantic: “Love is the highest function of our species — its vocation.” Impending mortality and tragic Jewishness (honed and satirized) give the men a crack at examining “our mortal span” and establishing the meaning and consequences of legacy. Bellow keeps heavy-handedness at bay. The world’s first gift, says Chick, “was the gift of itself.” Not an exceptional novel, but a wise and honest denouement.