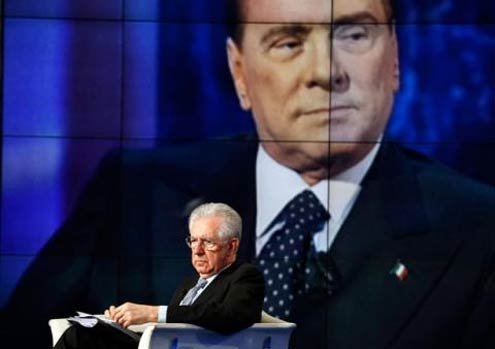 For Monti, a world of trouble; for Berlusconi, little to lose.
I

taly is two worlds, the first an all-ages, working class stew whose education mostly tops out with high school; the second a mostly male elite that can’t get enough of Anglo-American academic credentials paraded trophy wife-style. The first group comprises the country’s day-to-day backbone; the second — mostly intellectuals, economists and politicians — controls and legislates the upper reaches of the state itself.

The breakdown matters because Italy’s first world — tens of millions of menial and bureaucratic commoners known only by their surnames — still defers to the second, populated by the educated and the powerful whose tight ranks are littered with officer class snobs, common enough in Europe, who fully expect to be addressed as “doctor” or “professor,” the genteel and outgoing Prime Minister Mario Monti among them.

Until half-a-year ago, when Italy began sulking under the full weight of tax fixes and downsizing, Monti was a perfect modern combo: a non-politician, former dean of a prestigious Italian business school, and a Yale-trained economist. For months fellow elitists hailed him for single-handedly resuscitating a drowned Italy. A sagacious, all-world leader the English-language media soon anointed Super Mario had thankfully replaced the corrupt and philandering Silvio Berlusconi, the lowest of the low. Monti suddenly seemed all but poised to repair a decade of maladjusted populism, or so his admirers suggested.

That was until he hit Berlusconi-generated pre-election rapids, was forced out, and agreed to lead up decrepit Catholic centrists.

Now, as Italian national elections loom, he’s running a weak fourth (and last among heavyweights) in a campaign whose diversion of choice has been the obstinate Berlusconi’s puppy-carrying, phoenix-like resurrection. Awkwardly resized from patrician into politician, something he’s not, Monti now looks no different than the other members of the upscale world Italians will vote for grouchily. Yet again, the country’s entitled doctors and professors are struggling to make a mark among the hordes of surname-only Italians — middle class and retirees — who see themselves as collateral victims of a haphazard central government overly eager to abscond with their hard-earned benefits.

Only the self-made and Made-in-Italy Berlusconi, ironically the most entitled and privileged of them all, has made up ground — not a little but a lot. How?

First, his ageless, Rasputin populism, directed not at civics-minded electors but impressionable fans, tickles what non-doctors and professors imagine themselves as angry at, namely a conspiracy of bad intentions, whether the rule of banks, of crafty Germans, of arcane stock market numbers, of undying Masons with secret agendas. Berlusconi is doing what he does most shamelessly and best: exacting slash-and-burn revenge on publicly unloved detractors who forced him to endure yearlong mockery and humiliation that for the first time threatened to sideline him for good. An extraordinary three-month mass media blitz, his specialty, has seen him transform rumors of his demise into a remarkable source of dead-man-walking magnetism. Returning to player status, he has mastered the festering elite-commoner divide and bullied one side to cajole the other. It is a vintage performance that for the first time includes a willingness to mock his advancing age.

Berlusconi’s history of moral and legal corruption matters little among septuagenarian electors who still see taxation as a hostile act by which the state, this time abandoned to wealthy economists, repairs its financial hemorrhaging by “skimming” from the put-upon middle class. Berlusconi’s outrageous but strategically brilliant pledge to return steep first-home real estate taxes (introduced by Monti) saw conservative alliance push past the 25 percent mark in the polls. Dead if not buried last summer, Berlusconi and his allies now trail only the center-left, which, feeling the heat, has nervously begun negotiating with Monti’s lagging team for post-election leverage.

As always, Berlusconi has made his most effective inroads among Italians who still associate solace with town crier bellowing. In a time of change, which many Italians resist, Berlusconi triumphantly broadcasts reassuring stagnation. Neither a doctor nor a professor — more monarchic in fact — he still drives global elitists crazy by failing to adhere to, let alone play by, their rules. The more foreigners label him lurid, fraudulent, and Italy’s worst possible choice, the more he’s able to manipulate such disdain to revitalize his own comic book importance as the only Italian anyone truly fears, which in a two-speed country remains a fundamental form of respect. Those who like him (and some who don’t) remain enthralled by his inexhaustible ranting and the Napoleonic self-assuredness it suggests. Those who accuse him of delusions of grandeur must now reckon with portions of the electorate that find the delusion attractive.

His willful and will-powered revival is one for the ages, tantamount to an Italian Richard Nixon emerging from Watergate with a “rumors of my death…” smirk. The more his opponents and mass media call him a cockroach, and they do, the more he gains traction. And rightly gloats.