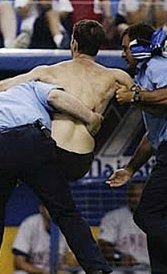 Take a benign incident during a baseball game between the Texas Rangers and the Seattle Mariners. In the seventh inning of an otherwise unexceptional matchup a heavy-set black man, a fan, lumbers from the seats toward second base, with the bored Seattle crowd cheering his adventure. The camera pulls away from him almost instantaneously.

“They’re going to have to call security out onto the field,” mutters Dave O’Brien, the ESPN commentator, disgusted, “because some idiot just ran on to center field. We won’t show that.”

O’Brien’s intemperate response reflected an informal agreement between baseball and television to avoid glorifying fan irresponsibility by giving it a public window. Such incidents have sometimes ended badly, with spectators attacking coaches and players.

Keep the camera away off the “idiot,” the logic goes, and you gradually disenfranchise those who might want to bask in thrill being nationally evident. It’s a tiny form of policing exercised in the name of socially responsible journalism.

But there’s another level of the “won’t show that” disgust that merits closer attention.

The Italian essayist Sergio Romano was asked recently whether media should shoulder part of the blame for promoting hysteria around Al Qaeda. He answered by comparing media in terrorist situations “to the great choir in Greek tragedies. They just go with the tide.” The press and television, he added, attempt to “capture the emotional feelings of the people and accompany them.”

Accompanying emotions is a spectacular business, and a visually graphic one. Bomb blasts, body parts and beheadings are now routine. The lurid pattern began in 1981, when the slaughter of Anwar Sadat during a Cairo military parade was captured in gruesome detail on film, and CNN, then in its infancy, replayed the video-clip carnage incessantly. People who knew little about the Middle East tuned in by the millions.

Such images have since become commonplace, led by the mother of all castrating, despair-inducing sequences, the collapse of the Twin Towers on September 11.

Participation in the monstrous offers visual mortality in a way much of the West is otherwise removed from: it’s immediate, mesmerizing, terrifying. Fear reassures the angry they have good reason to stay so; it emboldens the strong to be stronger; it confers a dramatically resilient anxiety that depending on character can be transferred into aggression, empathy, resignation or despair.

This is no surprise. For years, “snuff” was film’s legendary pornography; murdering someone on screen and selling the act was the outer limit of perversity.

Now, the perversity has a permanent address, terrorism, which gives appalling images inalienable rights, albeit attached to a tide of indignant adjectives against “thugs” or “barbarians” who deliver “horrific” pictures.

Yet most of the thug horrors are immediately broadcast.

Debates over the appropriateness of terrorism television have ostensibly deferred to state and constitutional definitions of democracy, including an informed and pluralistic society’s right to know. Since images censored by television usually make it to the Internet, competitive networks are not inclined to pass up good film.

Terrorist leaders and agents are remarkably placed to mesmerize viewers because they exploit the West’s fascination for a kind of ethical coercion that post-Holocaust civility ostensibly eliminates.

The terrorist vision (unadulterated, inexhaustible violence; a flawless anti-science) enthralls affluent consumers destined to live otherwise ordinary lives. The extraordinary terrorist method foments insecurity and nags at a middle class mind riveted by the misfortunes of others and engrossed by anxieties it can’t control or mend. The idea of what the barbarians might do next — unleash bacteria, chemicals, explode a nuclear bomb — preys on modern paranoia and fantasy. This in turn provokes a numbing string of knee-jerk “what ifs?” that the “emotional” media reports, rehashes and embellishes.

Which leads me back, predictably, to baseball and its crowds.

What struck me about O’Brien’s line, whether I agreed or not, was its decisiveness. We won’t show that. That’s some idiot. In three words, the message was, “No you don’t. You won’t get the stage. You won’t get our attention. No.”

To terrorism, because it awes us and gnaws at us, we say instead: Here we are!

This way, we invite being stricken, and invite the response: the juxtaposing of humanity and righteous revenge.

It’s a bad news being made into catastrophe’s peeping Toms.

But we don’t know better. So we watch.