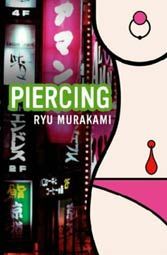 This Japanese “Basic Instinct” cocktail was first published in 1994 — about the time of the movie — but translated only 12 years later, probably as a result of Murakami’s more recent serial-killer success, “In the Miso Soup.”

Say this about the “other” Murakami; he has a chilling knack for memorable perversion. Here, he slams damaged goods head-on and probes the rubble. Graphic artist Kawashima, savagely beaten by his mother and brought up in Tokyo foster care, plans murders to exorcise rage he believes he might otherwise direct toward his infant daughter.

But would-be victim Chiako, an S&M hooker, walks into their first sexual encounter as a kindred spirit — she’s a sleeping pill masochist who was raped repeatedly by her father. Murakami merges origami and chainsaws in hacking into the psyche of his mad couple, each unaware of the other’s limitation. Kawashima hates his sadistic mother and seeks relief from night terrors; Chiako is fixated on her father’s abuse and wants to destroy or be destroyed. Here’s an erotically intelligent pas-de-deux that coughs up a tornado.