Parsing a Republican past 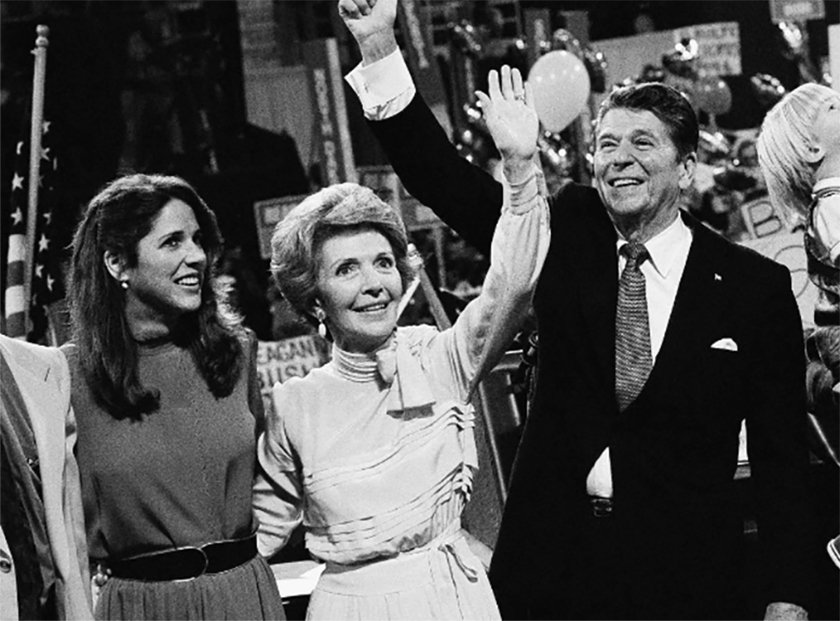 Ronald Reagan and his wife Nancy at the 1980 Republican National Convention.
I

grew up in Rockford, Illinois, in shouting distance of free-market guru Milton Friedman’s Chicago. The “Paleo-conservative” movement, focused largely on regionalism, national pride, and traditional values, originated in The Rockford Institute, a think tank started by local conservative activist and proto-“culture warrior” John Howard. My father and many other local leaders supported the Rockford Institute. Conservative activism was deeply entwined in social life and a daily topic at our family dinner table when I was growing up.

These days, a sampling of children like me, steeped in 1960s and 1970s Rockford conservatism, reveals mixed results. Some of us followed the conservative (and Republican) path that Donald Trump inflated to full-blown status. Others, like me, shifted toward liberalism.

I haven’t been satisfied by common explanations of how this divide came to pass, most offered by coastal commenters on both ends of the political spectrum. I don’t see myself as suffering from Stockholm syndrome after professorial indoctrination at elite universities. Nor do suggestions that Trump made his mark in the Midwest by playing on the region’s industrial decline make much sense to me.

Supporters of the Rockford Institute were wealthy and educated. If anything, they own companies where great numbers of manufacturing jobs were lost.

Nixon was obsessed by the Kennedys, whom he saw as the political puppet masters behind everything.

My son suggested journalist and historian Rick Perlstein might have answers in his four volume account (written between 1991 and this year) of the post-Kennedy rise of conservatism, “Before the Storm: Barry Goldwater and the Unmaking of the American Consensus,” “Nixonland: The Rise of a President and the Fracturing of America,” “The Invisible Bridge: The Fall of Nixon and the Rise of Reagan” and “Reaganland: America’s Right Turn 1976-1980.”

I went for the audio version of “Invisible Bridge,” a book first published in 2014. It begins with the Watergate scandal and corresponds to my early adolescence. At 39 hours of tape, it would just about get me through my autumn yard clean-up, and New Hampshire yards can be very messy.

Perlstein’s books are based on a mountain of popular culture — network news, “TV Guide,” movies, soap operas (and political data), polls, congressional testimony, and manuals for Jimmy Carter’s campaign staff. Reveling in the ironic, the prophetic, and the weird, Perlstein uncovers themes that he then forges into a gripping narrative. He illuminates “suspicious circles,” people who in one way or another had a hand in puncturing national myths. He also furnishes anecdotes, such as one-time Hollywood actor Ronald Reagan’s capacity for personal re-invention.

It was predictable that Perlstein repeatedly linked forgotten events with contemporary trends, showing where some things got their start. The DeVos family, Roger Stone, and Karl Rove, the attack dog strategists who came to the forefront at the end of the 20th-century, in fact go way back. Carter and Reagan were once considered unelectable. A secretary of state was accused of using his office as a campaign pulpit — his name was Henry Kissinger. Nixon was obsessed by the Kennedys, whom he saw as the political puppet masters behind everything, including the 1960s protest movement.

But what most surprised me about Perlstein’s writing was its personal, emotional voltage.

It reawakened lost memories. Out of nowhere I was reminded of the time I got my foot stuck in a lawnmower. The memory came rushing back when Perlstein described the nation glued to the TV during the 1973 Watergate hearings. The neighbor who ran to help me said my screams were the only thing that could have dragged him away from the Nixon drama.

But such memories can also elicit broader significance, not always cheering. It turns out Shakey’s Pizza and Ground Round were not just friendly local eating hangouts. They were national chains built on a manufactured nostalgia that slid nicely into Reagan’s campaign theme “it’s morning in America again.” When my fourth grade friends and I wore POW bracelets, we collaborated unknowingly in Nixon’s manipulation of the plight of U.S. war prisoners in Hanoi to further his own ends.

I felt like Dorothy discovering the Wizard of Oz’s tricks.

Reading Perlstein exposed old emotions and experiences while inspiring new ones. As an adult in 2020 with the benefit of hindsight, I have a better intellectual grasp of 1970s turmoil. I can sympathize with the Black Panthers and accept the conclusions of the Pike Committee’s investigation into alleged illicit activities by the FBI and CIA, rogue actions its probe largely confirmed.

Yet in reading about them now, I also relive the fear and threat we felt when our white, upper-middle class values and institutions seemed under attack. There is enough family loyalty in me to feel a twinge of guilt when Perlstein convinces me that maybe Jane Fonda (who made waves by going to North Vietnam at the war’s height) had a point.

But the stirred-up feelings are not all negative. My parents were devoted conservationists and my physician father knew what illegal abortions did to women. I happily relive the sense of progress vindicated when Nixon established the Environmental Protection Agency in 1970, and when the Supreme Court upheld Roe v. Wade.

I was unprepared for my feelings about Perlstein’s deep dive into the way Reagan repackaged the story of his peripatetic childhood. Though he grew up with an alcoholic father during the Depression, he was able to reframe the story into something uplifting. My father did this. And so did much of his generation. I found myself strangely touched by a more poignant and less political explanation of Reagan’s appeal.

At the same time, I felt like Dorothy discovering the Wizard of Oz’s tricks. When Perlstein quotes from the rhetoric of the conservative wave that Reagan surfed, I’m dismayed at how much of my father’s commentary was actually someone else’s. That aphorism about “no one dying in Watergate,” in contrast to the young woman who died in Edward Kennedy’s car at Chappaquiddick, was not coined by my father.

Lately I have been boring everyone I know with my enthusiasm for Perlstein’s lively writing, my newfound understanding of Angola, learning about our first sell-out of the Kurds, and how Jimmy Carter pulled off victory in New Hampshire. By now, I can almost keep Nixon’s inside men John Ehrlichman and H.R. Haldeman straight.

But I still have questions. Why did my father and Nixon — and to a lesser extent Reagan — retain their resentment toward an elite that they so successfully joined and often rose above?

Perlstein probably cannot answer that. But with ten hours to go in my audio book, there is still time.