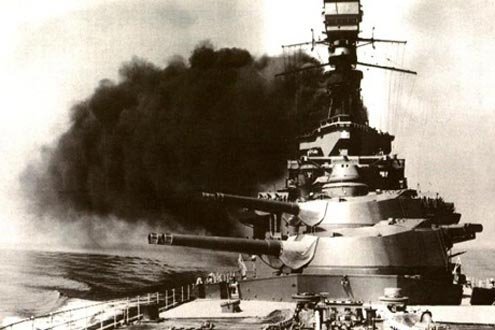 The defenseless HMS Repulse was gone in a few hours after Japanese air attacks.
F

ew in the American military liked what Billy Mitchell had to say, and he talked a lot. Stop building battleships, he said. Stop pretending the world depends on navies. Look up into the sky. That’s the future. That’s where you need to invest, lest ignorance turn vindictive.

Mitchell, among America’s few World War I army aviators (the famed Eddie Rickenbacker was another), did his loudest talking in the early 1920s, before the United States had an air force. His provocative views on the future of air power — “Air power has not only come to stay but is, and will be, a dominating factor in the world’s development…” — generated extreme controversy. He was demoted (from general to colonel), court-martialed, and ridiculed. Navies and their officer classes, already sublimely powerful, grew in stature in both the U.S. and Britain. Grand battleships grew grander. Only Germany, essentially starting from scratch after World War I, sensed that Mitchell was on to something. So did another pretender: Japan.

History makes fools out of those who linger too long on fading methods. Though the holding on can sometimes seem irresistible. Italy’s leading daily, the Milan-based Corriere della Sera recently went on strike for two full days: no newspaper, no web updates. Management seeks to trim staff by a third and look toward online solutions. Alternative new platforms risk making the print newspaper weaker, if not redundant. Rumblings of change in national subsidies could strip Italian dailies of their annual state stipend, for decades a fundamental source of newspaper income.

The rethinking-cum-dismantling process is already well underway in the U.S. and UK, where papers and magazines have closed or turned their attention to refining their online prospects, however dubious.

But Italy lacks a Billy Mitchell. Instead, it has only unions, which, to their purist credit, work hard to maintain all that’s entrenched, lest it be dismantled and people go jobless. They don’t look ahead. They build ships in the here and now hoping somehow to protect their sailors, never mind planes. It’s what they know to do and to do again.

Most Italian dailies have been losing circulation for a decade. But since Italian accounting and circulation practices are indistinct and audits rare, no knows much except that the online world is gaining. Behold Beppe Grillo and his blog, or the stunning growth of Facebook in a country that a decade ago knew little about email — and in many cases still doesn’t.

Corriere della Sera and its counterparts are the dreadnoughts of the 21st-century, elegant and pre-eminent, the vessels of communication for once and all time. The idea they might shrivel up and die is inconceivable — almost quaint — so is the idea that Italians have it in them to glean news only from tablets and smart phones. A generation and a half of journalists would prefer not to see it coming, let alone acknowledge the impending change. It’s too roiling, too upsetting, too likely to upend an old and established hierarchic order, since Italian journalism is an elitist vocation whose members are protected by the strictest of conventions. The profession’s upper echelons consist of what amount to tenured professors, salaries and benefits locked in for a lifetime. Once you’re in the navy, tests passed and badges earned, you’re in it for life. And an ordered life shouldn’t change.

Yet it is changing. Fast.

Billy Mitchell was accused of treason for telling military officials they were ignoring air power at their own risk. He resigned his commission in 1926 and tried promoting his views to anyone who’d listen. Not many did, at least not in his home country. America developed some its finest and most immense battleships in the late 1930s as part of a military spending wave intended in part to offset the Great Depression. Aircraft construction lagged, planes still seen as the tools of daredevils, including Charles Lindbergh and Amelia Earhart. In 1932, Nazi planes bombed and leveled the Spanish city of Guernica, astonishing the world. By 1936, Mitchell was dead.

Five years later, three days after Pearl Harbor and the U.S. entry into World War II, two of Britain’s most prized vessels, the battleship “Prince of Wales” and the battle cruiser “Repulse” found themselves off the coast of Malaya, steaming to intercept Japanese ships. Neither vessel had anti-aircraft guns, still considered quaint. Then came Japan’s Billy Mitchell haunting, torpedo planes and dive-bombers, and in hours both massive ships were blown apart with the loss of 840 sailors. Over the course of World War II, swooping tin-and-metal gnats sank some 15 battleships, many longer than city blocks. Naval power as known for centuries was forced underground, into submarines, never to fully resurface. Of the giants, only aircraft carriers remain, appropriately.

Lives are not at stake in Italian journalism, but the planes are in the air, if only the vessels below them weren’t steaming ahead as if yesterday lasted forever.