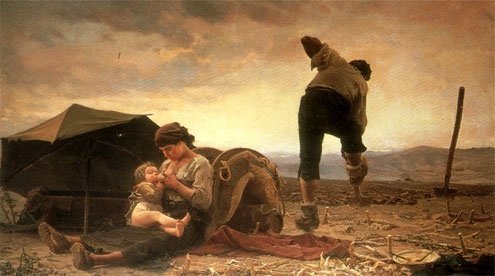 Less removed from nothing than most admit...
A

s the spotted Greek sun sets in the east, euro-skeptics stoke their mortuary bonfire. Vindicated are those who a decade ago warned that Germany and France couldn’t cover indefinitely for weaklings Portugal, Greece, Ireland, Spain. “The euro zone has failed,” wrote veteran euro-basher Vaclav Klaus, the Czech president, serving humble pie to the mighty in a carefull-worded Wall Street Journal lament.

But something happened on the way to the Forum.

The country at the butt of most early euro mockery, the one considered mostly likely to bring the chaotic system down, wasn’t Greece or Spain but Italy.

But in a twist of perverse and symmetrical Machiavellianism, Italy can no longer serve as anyone’s scapegoat. Why? In essence because it never took enough chances to fail.

Failure occurs when nations overextend themselves, usually through borrowing too much. The chits called in, the bank of record has no clothes. All falls down.

Not in Italy. The public deficit has long been an unmoving set piece, a morose national treasure, immune from cardiac failure. Failure to innovate has ensured insulation from the take-off-and-crash system endured by Europe’s poorer but greedier members. Not dependent on outside credit to wash its wounds, the state achieved negative self-sufficiency. Skeptical to the hilt, slowed in part by red tape, Italians refused to overextend themselves.

Credit card holders were few and far between, with bank cards entering common usage only two decades are. Loans were difficult to secure. As a result, concepts of easy, facilitated credit took a back seat to the pre-postmodern concept of saving up for a rainy day. With family units still often inclusive of pre-World War II elders, preoccupied by the possibility of instability, real or perceived, the spending cordon was tighter.

Tax cheats and good people (often synonymous) shoved money under various kinds of literal and metaphorical mattresses to defend against the thieving state.

Italy’s savings levels have long been among the highest in Europe for decades, mostly because family’s spent to take care of generations of membership. In part as a result of the persistence of usury, debt, when it occurred, was managed internally, part of an informal but profound system of checks and balance.

Unlike newer EU members, who were tempted to live high off the hog because they could (Spain, Portugal and Greece were all fresher to dictatorship), Italy’s middle class stuck with old prejudices, which kept it largely on the straight and narrow. The family-feudal principles at the cornerstone of the country’s real and sub-economies never lost traction.

With jobs scarce, families knew to expect their young would stay at home until not so young. Covering for frustrated or feckless children was not a choice but an obligation. When a patronage system refuses to yield to a functioning meritocracy, hunkering down becomes a stylish art form, one that Italians know better than any people in the world.

Moreover, Italians understood more swiftly than others that euro would do weak economies no favor. By 2003, they redoubled their caution. Mortgage and loan applications stabilized. The economy made few major strides but the general level of debt was more distressing than backbreaking.

In essence, Italy preemptively rescued itself from disappointment by pre-disappointing itself.

This skeptical anti-optimism perceives bureaucracy, whether generated by banking industry or politics, as suspicious. Insurance flourishes because it bolsters the status quo. Small and midsize businesses are the limit. It’s a conservative resourcefulness of spirit that gives the likes of Berlusconi (who has all but advocating tax dodging) their longevity.

Economists have rationalized the Italian anomaly in a hundred ways. But Italians save money for one reason alone: They visualize no civic or collective future. It’s each unit against the world.

And when you’re skeptical of future — understood as a possible transformation in social and work mobility — you peddle in place to maintain what you have. Italy is nobody’s fool. It envies the Chinese because it recognizes their shrewdness but loathes their work ethic.

Faced with a Napoleonic bureaucracy that swears by delay, Italians are trained to view institutions and systems as unreliable, which fulfills a backhanded version of restraint.

When money is not just a way to get rich and look prosperous but more basically a means to fend off encroachment, you save to protect yourself from the very state you’re supposed to support as a taxpayer.

“There’s always a new worst,” writes Justin Taylor, “only tenure varies.” Thus, Italy’s fatalism and anti-civic skepticism can be read as prudence, which in turn becomes a form of salvation. The nation people love to mock knows its own stains better than most. They endure, and as a result so does Italy’s tenure.