No brain to speak of 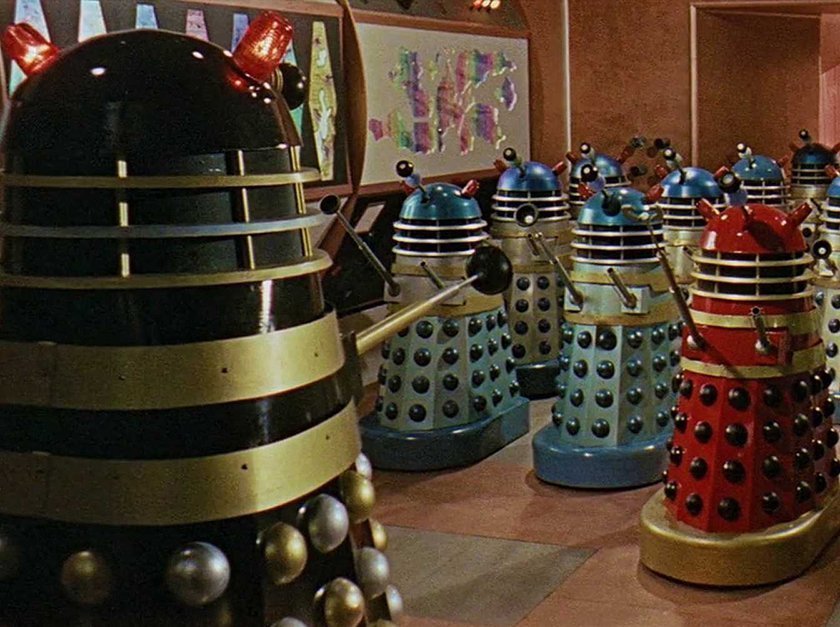 The Daleks on "Doctor Who" would have had little problem with phone banter.
A

Lyft driver once told me the daftest thing, that there are some rich old couples who, when one of them is dying, get a special kind of robot which is able to mimic the behavior of a person. They press whatever little button there is or do whatever the manual tells them to do to set the robot’s focus on the dying half of the couple, so the next few weeks the robot flanks the husband with end stage renal cancer and learns how he takes his coffee and his annoying habit of always misplacing his socks. Then when the husband dies the wife is not lonely at all, for she has her robot-husband.

Whether this is true, I can’t tell you. But if it isn’t the truth, it probably will be soon. After all, there are delivery robots in Berkeley now. In appearance they’re little more than black boxes on wheels, but with this difference: when they run into telephone poles and fall on their funny little heads, nice Muslim girls in hijab feel sorry enough for them to set them back on their feet.

So far as I know, there aren’t any robots in the Midwest that are quite so advanced, but we have our share of ordinary robots and they cause us trouble aplenty.

You imagine a pleasant, if somewhat washed out middle aged woman in a gray t-shirt.

More than half the people who call on the telephone are not people at all, though they do a credible job making you believe they are. Once all the AIs had robotic voices like the printer lady’s (that woman in the computer who used to speak to you when you pressed “print”). A robot could sound like her or it could sound like C-3PO from “Star Wars” or a Dalek from “Doctor Who.” Whichever it sounded like, the syllables were all divorced from each other when it did speak, and you knew very well that this speaking thing was just a machine. Now they laugh at appropriate moments and have voices modeled on real human voices. They say, “Hello, I’m Abby from Big Freaky Dog.”

When you say what a weird name that is, Abby laughs and says, “Oh, yeah, we get that a lot,” and you imagine a pleasant, if somewhat washed out middle aged woman in a gray t-shirt. She has wrinkles on her face and could be somebody’s mother. You imagine her with mousy brown hair which is just beginning to gray. So you spend a minute or two answering her questions, and then it strikes you that there’s something a bit odd about her. And since you have spoken to robots before you know that if you say “um” one time too many or begin to take back something you said a second ago or add just one more clause, the robot breaks. However, none of these things have thrown this middle aged woman, and besides, she laughs and hesitates and says “um,” so you steel yourself for an unwarranted act of rudeness, and charge. “Are you real?” you ask. “Or are you a robot?” Abby hangs up. And then you know; no self-respecting human being would have hung up.

Even Abby is not as advanced as they get. My mother spoke to a robot on the phone and when she asked it if it was a robot, it said, “No one’s ever asked me that before!” and then immediately went back to whatever it had been saying.

My mother spoke to a robot on the phone and when she asked it if it was a robot, it said, “No one’s ever asked me that before!”

But even the newer, more life-like models are not fool proof. If you want to catch them out, you can. All you have to do is stop acting according to formula. That means manners and decorum must be chucked out the window. You can’t be impolite according to book either, because probably they know how to handle that. The AIs with higher IQ may know what to do when somebody asks them whether they’re a robot, they may know how to deal with pesky scenarios 1, 2, and 3, but you can bet that not every pesky scenario has been mathematized into their brains.

Then you might say, “You’re not very interesting, are you?” Again, the robot manages to seem human, saying, “Excuse me!” or “I’m sorry?” What it doesn’t do is insult you back.

So far, it could still be a human being at the other end of the line. You’ve already asked it if it’s real, and it’s already told you that no one’s ever asked it that before.

That’s when you begin using random lines you’ve heard on Youtube (on the Catherine Tate show). You point to your face even though it can’t see you because somehow the gesture helps you say the words. “I’m not bovvered. Do I look like I’m bovvered?”

“Excuse me?” it asks, and from its tone you understand you understand that should this turn out to be a person after all, you will need a lot of excusing.

But it’s getting promising now. Because in all probability this is a robot. It hasn’t really asked you to explain yourself or told you you’re a jerk or tried to explain itself, both of which a human being might be tempted to do in a situation like this.

So you deliver the last blow. “Two plus two is four.”

And that is how you prove, for your own satisfaction, that the person on the other end of the line has no brain to speak of.