Nectarine of the gods 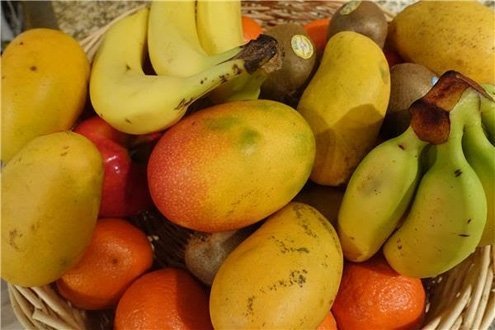 Find ways of putting abundant fruit to good use.
A

friend recently served me a nectarine salad that knocked my socks off. Her inspired recipe got me thinking up fruit-based desserts and salads suited to the summer months. I came up with several ideas that would save too-furry peaches and seemingly too-ripe apricots from going to waste (we live in France’s peach basket, so I always buy too many).

Growing up in Texas, fruit salad as served in most homes was a syrupy mix from a can with seductive processed cherries thrown in for color. But we also had the jewels of the Rio Grande Valley – luscious pink grapefruit that my father ate with a touch of salt and huge oranges (they also showed up in the toes of our Christmas stockings). We never had to worry about scurvy or vitamin C deficiency.

My mother was a master at making what we called “ambrosia,” another form of Italy’s ubiquitous Macedonia, a fruit mix (macédoine, the French equivalent, can include vegetables and salty foods). Ambrosia was a colorful holiday dessert bowl that included bright pink and deep orange chunks of citrus and whatever else might taste good with them. My mother could only find packaged coconuts to garnish the fruit (the real ones were unheard of) and once even added a pinch of black pepper as contrast. Now that coconuts are everywhere, it’s best to grate them and use it fresh

Black pepper is also lovely on fresh slices of mango dressed with extra virgin olive oil and vinegar, or with lemon juice and served as a salad.

Thanks to my mama’s Gourmet magazine subscription, we were often treated to fresh cherry clafoutis, fresh cherries baked in a custard or peach or blackberry cobbler, a southern favorite always accompanied by a dish of fresh whipped cream (no sugar added) — just in case the thing itself wasn’t rich enough already!

But back to the amazing and spicy nectarine dessert my friend in Nice put together for a hot summer night. Her salade de nectarines aux epices (it sounds even tastier in French) was one of the best fruit desserts I’ve ever tasted.

For four people you’ll need four firm but ripe nectarines (the white kind if you can find them but the yellow ones will do).

Now, in a saucepan, mix 35 centiliters of water, 125 grams of sugar, 1 gram of saffron, 4 star anise, 1/2 teaspoon of cinnamon, 1 teaspoon of vanilla, a few grains of black pepper, a splash of red wine and the juice of a large lime. Bring to a boil and simmer until the syrup is reduced by a third.

Meanwhile, cut the unpeeled (or peeled, if you prefer) nectarines into small cubes. Pour the warm syrup over the fruit and let the mixture cool for at least an hour or more (which means you can make this the day before a gathering).

Serve with chopped, toasted pistachios and slivers of fresh mint on the top of each dish.

This is truly a magical taste of summer, and you can experiment with other fruits — peaches, cherries, apricots are all at home in the basic syrup.

For a fast alternative dessert, freeze the cubes of nectarine, sprinkled with the sugar and vanilla. At serving time, whip 2/3 cup of cream in the bowl of a food processor and, when it’s fairly thick, add the frozen nectarines and whiz just until the mixture turns into a nice thick ice cream. Serve immediately. You can do the same thing with strawberries, peaches, plums, or berries.

My Five-Minute Ice Cream might knock someone else’s socks off.