My delight is small 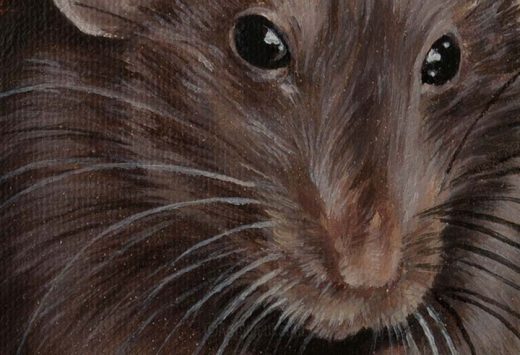 The very method of the mouse's arrival was round, for he came out of nowhere…
M

y older sister has a wall hanging, sent to her when she was a baby by our aunt, who lived far away. I don’t think we ever hung it on a wall, but it was always kept safe somewhere, in a drawer or a little box. And I remember unfolding it to see the little brown bear in the middle, and later, to read the blue words that encircled the bear. The words said, “Good things come in small packages.” Our aunt had embroidered it herself, and sent it all the way to Bangladesh, to the small, firstborn infant of her little sister.

When I was a child, the song I would ask my mother to sing to me whenever I was blue or under the weather was “Home on the Range,” and as she sang, I would wait for the lines, “Where seldom is heard a discouraging word, and the skies are not cloudy all day.” A song filled with happy things, but it addressed the sadness in me. I wanted to live in that place where the sun broke through.

But sometimes there comes to please us one who is much smaller than the sun.

I have been visiting in Berkeley and trying to cast off both gloom and tiredness. Now, how others do this, I do not know, but I find that a daily dose of solitude is as necessary to the soul as salt is to the diet. Due to this, I have been sequestering myself at Berkeley’s GTU library, reading about the girlhood of St. Brigid and mulling over my particular dilemmas. It is summer, so the library closes early, and it closes especially early on Friday. So, one Friday at five, I walked out of the library, not yet ready for humanity. Across the street, there is a cluster of evergreens and a bench for seating, so I went there to sit awhile and watch my thoughts and the people passing by. But my thoughts were hardly pleasing.

Just then, a mouse broke through like a merry little beam of sunlight.

He was like no mouse I’ve ever seen before. It wasn’t entirely his appearance that set him apart from his brethren, though that was part of it. He was dark gray and had the most perfectly rounded pair of ears – ears lighter than the rest of his body – and a naked tail. All in all, he impressed upon me, at the moment of his coming, a singular sense of roundness. For not only was he, himself, round – round, large, and possessing all the sweetness of cherub cheeks in his wee cherub body – but the very method of his arrival was round, for he came out of nowhere, bouncing across my line of sight.

Just then, a mouse broke through like a merry little beam of sunlight.All in all, he impressed upon me, at the moment of his coming, a singular sense of roundness.

And as he bounced, I remembered yet another bouncer – Tigger. Every jump of this tiny creature seemed a perfect half-circle. I think I did not laugh, but you know how a fizzy drink bubbles? Well, I bubbled inwardly and smiled and loved a mouse, and my aunt’s brown bear and blue words came back to me – good things come in small packages.

But that was not the end of it. The bench and surrounding trees are right outside of the Bade Museum, which belongs to the Pacific School of Theology. The Bade is a large stone building with arched windows. My little gray mouse, my fat gray mouse, he ran up the wall and came almost to the very top. But before he had gotten quite all the way up, he was forced to pause a moment and consider. The stones had given his tiny feet something to cling to, but now he had got to a concrete ridge, which was entirely flat. If he wanted to get to the very top, that ridge would have to be scaled.

I was standing now, watching and worrying for him, wanting to turn aside and go. He was a mouse. He would be fine. Instead, I stayed put and watched. For a second, I thought he might turn around and come back down, but, no, he chanced it, and fell. I averted my eyes, covered my face, and cried out for mercy.

I am not fond of dead creatures. But he had imparted dearest delight upon me, so I lowered my hands and looked. Nothing. And then, a scampering through the dead leaves. His size, I thought, has saved him. Do you know, as he scurried off into the low-lying plants that grew a few feet away, he looked smaller to me than he had at first? I followed him, just to be sure that he really did live, and left when I saw the leaves shifting for that small gray body beneath them.

Walking back home, I asked the strangers in the street whether they knew anything about mice, and they looked at me askance. But it was a spirit of friendliness fortified by sudden joy, not lunacy.