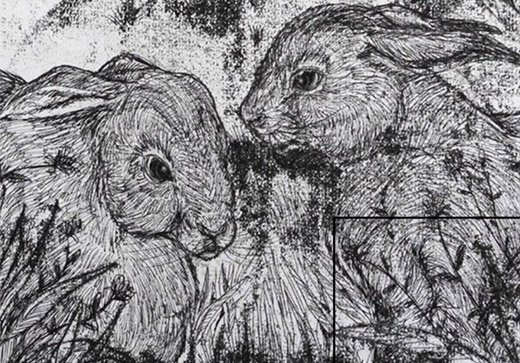 Richard Adams' rabbit fable, "Watership Down," was a massive best-seller in the 1970s.
U

p in the attic, there live two rabbits, Muchness and Mosey.

I’d been wanting rabbits since at least the year before last.

It all happened on account of the novel “Watership Down.” I knew of course that the characters created by the author Richard Adams were wild rabbits, but you cannot tame a wild rabbit. What I wanted was a pet, so only the domestic version would do. But the two variations, the wild European rabbit and its domesticated kin, are not entirely different.

Watch your pet bunny and you’ll see that it retains many wild traits — the tendency towards digging and destruction, and, in the case of my two, skittishness.

Though I’d been reading rabbit forums and browsing all the available bunnies on Craigslist for a while, I had no definite plan to actually bring a rabbit home. After all, my situation is not ideal. Rabbits, like cats and dogs and babies, deserve steady homes. But I made the mistake, sometime in September, of going into a pet store and making cow eyes at a pair of brown Netherland Dwarf rabbits.

Left to myself, it might all have come to nothing. But I was not by myself. Someone said to me, “Go on, why don’t you. You’re mooning over them all the time.” So in the end, I pulled out my debit card and gave away my entire month of earnings in exchange for a pair of rabbits.

In scuffles between rabbits, somebody must submit.

And once they were home, safely ensconced in the attic, the drama began.

Rabbits, especially when they are young, are hard to sex. In fact, they are notorious for being assigned the wrong gender. Having read many, many rabbit forums, I asked the girl at the pet store several times if she were really, truly sure that both were girls. She assured me that they were. I did not entirely believe her, so I watched them like a hawk for the first few months. They were six months old, or so I had been told, and therefore sexually mature. There were no signs of amorousness. Once I saw Mosey mount Muchness, but it could not have been mating as “she” was facing the wrong direction. The mounting happened a few more times, sometimes with a certain amount of violence, kicking, and occasionally a bit of fur being pulled out, but the one at the bottom (usually Muchness) generally stayed still and took it. The first time, I intervened. But then I read about it, rabbit people all say that you must not meddle, that rabbits need to figure out their hierarchy. In these scuffles, somebody must submit.

Then one day Muchness got sick. It was a sickness that revealed necessary details. I had given them their greens in the morning, lettuce and collards, thyme (or cilantro, or parsley, or something), and cabbage leaves. The cabbage leaves, I believe, were the culprit. Brassica (that is, cabbage, cauliflower, and broccoli) can induce gassiness in rabbits, and rabbits do not do well with stomach problems. Generally, I’d been very careful about what I fed them and how much, but this day I gave cauliflower leaves again in the evening. That was at about seven. At ten, I went up to give them their daily dose of pellets, over which they get very excited. But Muchness showed no interest, choosing instead to lie listlessly under the desk.

For a bunny, the bumpy motion of a car is medicine for colic.

A rabbit that does not care about her food is a poor rabbit, possibly close to death. Rabbits have special guts, not like ours, not like a cat’s, not much like anything’s (except possibly a horse’s). It must keep going all the time, which is why you will see that a rabbit is either nibbling or desiring to nibble. They must not go more than a few hours without food. However, if they have a stomach ache, they may not want to eat, which only exacerbates the problem.

I stayed up all night, trying to get her to swallow something. But the parsley I dangled in front of her nose was not interesting, and neither was the raisin (and rabbits love sweet things). Finally, I came across a piece of advice online: crush the pellets in water. I tried that, and that she ate. I slept an hour, then woke to feed her. We passed the night. She was alive the next day. But clearly there needed to be a trip to the vet. So off we went in a few days.

The vet was impressive. People doctors hardly look at you anymore. They used to tell you to stick you to stick out your tongue, and look down your throat with a flashlight. But alas, now they all look at their computers. I feel I read somewhere that modern astronomers can’t read the night sky; they must consult their computers. Well, the rabbit vet was not like that. He held them in a towel and felt them up and down. “No gas now,” he said. Two perfectly healthy rabbits. And in addition to giving me the name of a medicine that helps with gas in rabbits (simethicone for babies), he told me other ways to deal with it. “Take them for a car ride, or put them in a basket on top of the dryer.” Apparently, that bumpy motion does wonders for gas.

But then he asked if I knew whether they were male or female. I told him I wasn’t certain as I hadn’t flipped them to find out (since the bunnies and I were still in the process of getting acquainted). So he flipped them, Mosey first. Girl. And then it was Muchness’s turn. “You little marauder,” said the vet.

Muchness is a boy. And that is another story.