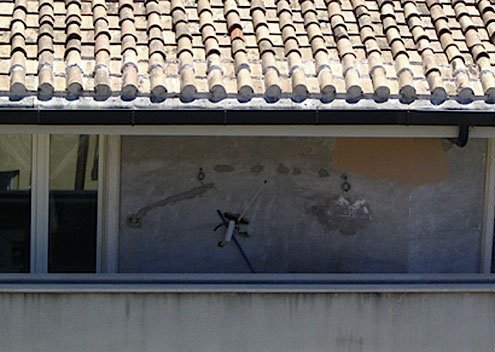 I lean out the window and try to reason with the luxury builders. I want my summer back.
T

he dentists lug the big drills early. Morning is its own coolant. It’s not poetic. They open raw holes, clean up, leave. They force maw-bits into pre-marked spots and make them explode. They then hose the detritus from the drain, coaxing down the pulpy mucous with sticks. This goes on for hours.

Capital ventured — it’s lavish remodeling mostly — is noise gained. In a time when many claim affluent destitution, the clatter contradicts complaint. Building is not a poor man’s sport. Summer dentists don’t come cheap. The ones from Albania, Romania you can pay in larks, late and rude; but not the architects or their barking foremen, from the south of Italy, boorish men with cigarettes in their arm pits, directing obvious traffic to no special avail.

I placate the hubbub with earplugs but it does me little good. Weekdays come with the wailing of the drills.

Before the hulking dentists, summer in Rome was a preferred season. Mornings and evenings in this neighborhood took their shushed cue from the pre-noon cool and held still for weeks on end. The city had a garden sprinkler feel, a front-yard sense of quiet inclusion. By night, kited breezes blew distant fireworks toward the yellow-sulfur moon. The high popping of color courted children. Youth memorizes bright lights long before intellect gets to buckets and solvents, the killing explanations. I’d watch the flashbulb skies and fabricate exoticism.

The fireworks persist. Sonic midnight is sound for the ages. Now, though, it feels a little like an irritant. It’s the one-too-many after a long day. Age plays a role. Growing hormones feed on loudness; adult ones — sagging — disparage the salsa of multi-tasking telephones and feature-laden motorbikes, their supercharged engines bitch-slapping mufflers into submission. After the fireworks, boys and their girls gear up for more. I overhear their eager dares.

In the center, clubs are filled. Near Piazza Navona and Camp de’ Fiori — hot spots in and out — kids chug beers and preen in front of churches. They soil their kisses with leers. The beer craze is fairly new, exported from American pulp fiction. The new Rome night — no, the new vision of an old night — borrows from a well-known text — “La Dolce Vita” — but makes it younger, popular, more massive.

The previous version, which I saw in the 1960s on Via Veneto (then the center of the party universe), was in its 20s and 30s, jaded gigolos and starlets on the lam, their prowling directed toward those with many American dollars — and they were few. Where Fellini’s cameras didn’t go was a Rome that amused itself with fireworks and shuffled off to bed.

Affluence, like so much else in this city, is a crime of passion. The drills are frills. You tell your friends what you’ve remade, or what you intend to. You tell them what it costs, the planner you’ve hired, the gadgets you intend to install, the parties you will soon hold to include them. While the dentists work you fill the void with an SUV, a BMW, even a Hummer — so expensive and so rare it rates an enviously disapproving nod (it also won’t fit down many center streets.) You ensure your children get designer wear (riding above “butt-cracks” is the word Fendi, a vulgarity-neutralizer perhaps) and Smart cars. You rationalize the details of the cosmetic life at Mass. Or not.

I accept everything but the sounds.

It’s the dentists — their ogre-like persistence — that confound my patience. The way they arrive on time (like Mussolini’s fake trains), pausing only to kneel and install the bits, heedless to July’s calming sign, Cancer, that sliver of the zodiac sensitive to one biscuit cracking. For years I’d camp up here, opening the windows of my rooftop lair to invite in the sounds of the hungry lions and the elephants at the nearby zoo. I’d urge summer to make itself at home, accepting even the occasional roar of passing trams.

Now, I lean out the window and try to reason with the luxury builders. I want my summer back.

“When will you finish drilling?” I cry in Italian. Non ce la faccio più” — I can’t stand it.

The drillers are surprised, if they hear me at all. One pauses and examines me perplexed. The foreman probes this development, clears his lungs of parked smoke, and leans in my direction. I’m in a window less than a block away. “What’s it to you?” he asks.

He pigeon-nods, then juggles his palms until they rotate and flatten out before him, like a pudgy ballet dancer curtsying before an audience.

“They’re paying millions,” he shouts, smiling from the stone railing, “they’ll get their money’s worth.”

He hasn’t understood me.

He instructs the paper-hatted dentists to go back to work.