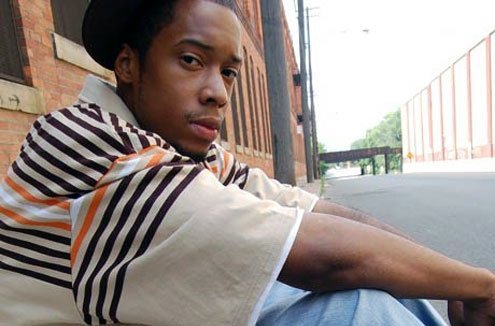 Black Milk is back with "Album of the Year" (Decon).
A

utumn is my favorite time of year. It’s leaves and the crispness of the air. It’s the day I sat in front of Vittorio Emmanuele II memorial for two hours watching traffic entranced.

Autumn, like spring, is cluttered with so many good musical releases that it’s impossible to keep up. But the cream always rises.

Speaking of cream, Black Milk (born Curtis Cross), a Detroit-based producer and emcee, has a presumptuously-titled new album with a good explanation. Album of the Year (Decon) is not so much a declaration of listener expectations as a framework for the lyrics, the literal story of Milk during 2009.

Like every other LP of his (including 2008’s essential Tronic), Album of the Year demonstrates two things clearly. First, Milk is not a good lyricist. He tries, bless his heart, but in a similar manner to Detroit’s former beat-making demigod J Dilla, his flow is standard at best and clumsy at worst. Though on a personal level, it’s hard to fault the guy for wanting to get a few things off his chest.

Second, his music is phenomenal. Be it a guitar solo perfectly complementing the crashing cymbals and boom-bap beat of “Closed Chapter” or the galactic synthesizers of “Warning (Keep Bouncing),” Milk’s ear for melody is matched only by an astonishing attention to detail.

With two more production credits on deck for release before the year is over, there is still plenty to look forward to even if you don’t think this is your album of the year.

The year 2010 has been a particularly good year for noise-, post- and drone-rock releases. Yellow Swans, Ufomammut and Fennesz Daniell Buck (covered here) pop into to mind. Add Coil Sea‘s self-titled album (Thrill Jockey) to this list. The band is really just Arbouretum guitarist and lead singer Dave Heumann with a few of his friends along for the jamming.

The result is a wonderfully grunge-y four-song post-rock pastiche. Like the Fennesz Daniell Buck collaboration, there are times where it meanders and times when the improvisation is clear. Unlike that album, however, Coil Sea feels more melodic, more organic and less outwardly ambitious. Heumann pre-wrote the melody to “Abyssinia,” but the rest is just riffing and some limited verbal cues for tempo and key.

“Dolphins in the Coil Sea” is the most “epic” sounding of the songs with Heumann’s soaring guitar and Michael Lowry’s undulating drum work, as good as any Explosions in the Sky tear jerker and effectively untouched from the original recording. It also might be the best example of a casual get-together among experienced and acquainted musicians that had no real end-goal. They had some studio time booked in Baltimore and each other’s intuition. Remarkable stuff.

Finally, Jason Adasiewicz has assembled a trio for his latest album built around an instrument not typically known for its foundational qualities, the vibraphone. The instrument enjoyed its groundbreaking heyday in the 1950s and early 60s, but a slow decline has made any vibe-based album a rarity.

Adasiewicz does better than just play competently on Sun Rooms (Delmark). The Chicago-based musician has assembled a stripped-down trio (rather than “Rolldown,” his typical quintet). It functions much like a piano trio and amplifies the lush ringing of his instrument.

It’s an effective gambit that works just as well on covers of Sun Ra and Duke Ellington as it does on original material like “Stake” and “Rose Garden.” At turns colorfully forceful and contemplatively quiet, Sun Rooms gives space for the vibraphone to work its magic. Crisp, rich, enveloping: This is perfect autumnal accompaniment.