Messages to the World: The Statements of Osama bin Laden 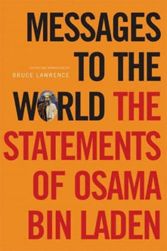 Months before the invasion of Iraq, bin Laden offered this advice to enemies of radical Islam: “Pack your luggage and get out of our lands. We desire this only for your goodness, guidance, and righteousness, so do not force us to send you back as cargo in coffins.”

This, at first, was mocked.

There’s more: “Guantanamo is a historical embarrassment to America and its values, and screams into your hypocritical faces…”

This, at first, was discounted.

The unsettling part of reading zealots, in black hats or white, is their rational sensibility. Bin Laden is nothing if not PR-wise: “You are a nation that exploits women like consumer products or advertising tools, calling upon customers to purchase them.” He sounds at times like a Baptist preacher. What distinguishes bin Laden’s rhetoric is its ascent into militancy, which is gradual.

Saudi Arabia, his homeland, is the flashpoint. “The place of revelation,” he insists, is occupied by Christians and their lackeys. “A gloomy scenario,” he adds ruefully. Bin Laden began publishing his warnings in 1994. No one bothered assembling them until 2005 — in Britain, not the United States. The roots of 9/11, the book makes clear, are political and strategic, an ambitious move in a lurid chess game. “You fight, so you exist,” he says, redirecting Descartes. This is an important, highly lucid volume.