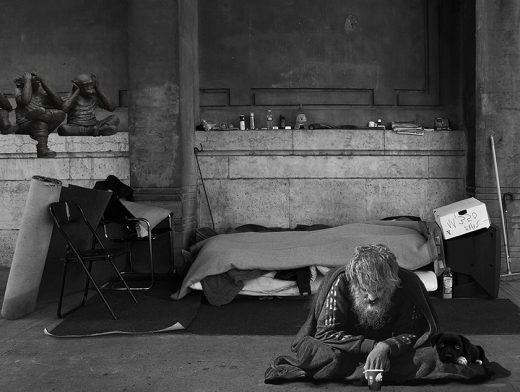 ccasionally an incident you read about in passing leaves a lasting impression. One such event occurred late last year in Kansas City, Missouri. The more I pondered what happened, the more it called into question what rights the modern American citizen actually has. I do not mean the right to shop and be merry, which is uncontested, but rights of an entirely different order.

Let me sketch out a rough scenario of what happened.

Concerned about public welfare, a group of Kansas City citizens banded together and decided to meet regularly in local parks where they would hand out food to the homeless. They called themselves “Free Hot Soup” and created a Facebook page.

Despite the soup kitchen-like name, they also brought along sandwiches, casseroles, and cupcakes.

The members of Free Hot Soup were not merely interested in filling hungry bellies, but also in getting to know the homeless. Take that guy who always stood at corner “X”; who was he? What did he need? Maybe a new pair of shoes, or a warm jacket, or medicine to soothe his arthritic joints. They could only find out by getting to know him.

These are basic goals, not wild, earth shattering ones.

Concerned about public welfare, a group of Kansas City, Missouri citizens banded together to hand out food to the homeless in the city’s parks.

But a third party also made an appearance. Kansas City Health Department officials had heard of the movement and its mission to share food with those in need. How could they possibly let such carryings on continue, since, after all, they, not some self-appointed body, were the nominal custodians of the homeless?

Was the food being handed out even safe? The homeless population had to be protected from the danger of food borne illnesses.

So it was that the city’s Health Department broke up the gatherings, dumped all the food into trashcans, pouring bleach on it to deter hungry scavengers.

The Health Department reprimanded the Free Hot Soupsters for distributing food without a license. Until they got one (an easy process, or so they said), their compassion was illegal.

But the Free Hot Soup people objected to the way they’d been characterized. They were not an organization. They were merely a group of people helping other people and help, they insisted, required no permit. Call it a picnic in the park among friends.

But the battle intensified.

The Health Department disputed Free Hot Soup’s portrayal of their actions — homeless people could not be classified as friends, and no group of so-called friends had a picnic in four separate parks at once.

That day the Health Department won the upper hand.

A year later, Free Hot Soup continues to operate (still without a permit). Yet the questions remain. To what degree are we, the members of a modern democratic state, truly free to exercise our conscience?

Yes, we receive certain privileges. Not only can we buy what we want but we’re encouraged to spend beyond our means. Doing so helps the national economy, or so we’re told.

We also have the freedom to entertain ourselves: we can go skiing, clubbing, or to a movie. So long as we nest in the world of pleasure, all is well.

But what exactly is the meaning of the word liberty (if it means anything at all) when we step out of the confines of self-amusement and into the realm of more significant life choices?

The local Health Department broke up the Free Hot Soup gatherings, dumped all the food into trashcans, pouring bleach on it to deter hungry scavengers.

Free Hot Soup decided to use its freedom to feed people, only to be told this was not a choice it could make, at least not without a permit.

You might object, saying all they needed to do was abide by the rule of law and obtain the required permit.

But the Free Hot Soup people are right in believing that they should not need a permit.

We have already delegated too many of our basic human responsibilities — including moral choices — to governing authorities. So much so that we’re in danger of becoming measly little people with nothing to do but watch television, surf the web, and die of inertia.

Despite living under a system of government that promises to cater to our every need, here we still sit, yearning to make the moral choices we’ve given away. In fact, the worst aspect of this brave new human life may be the way it forces individuals into isolation. Perhaps naïvely, I imagine a once-upon-a-time world in which you shared your umbrella with a stranger, and by doing so got to know him. You’d go to his house, and he’d come to yours, and a new realm of relationships would come into being.