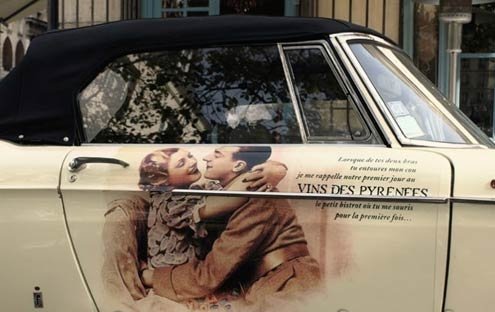 aris, l’amour, la Tour, the mood, the food! A city of wonder and one to which we recently returned planning to go back to Chez Benoit where, 25 years ago on our first romantic trip to the city, we sat stunned and enchanted over the food.

There was a delicate vegetable terrine over which the owner, an enormous Viking with a villain’s curving mustache and hands like hams, delicately poured a spoon of his lovely, perfectly balanced sauce. Later came tiny scallops barely seared in beurre noire; airy pommes soufflés; a cheese board not often seen in most restaurants, and a chocolate wonder we still dream about. This was the first dinner out for which we paid $100, and it was worth every cent. Such a memory.

With great anticipation, we returned to the scene of gastronomic delight, the memories emerging, and the restaurant now in the hands of master chef Alain Ducasse. What could go wrong?

I should have known what was coming when I saw the enormous plates next to us, filled to the edges with huge cuts of meat, followed by a cheese course that could easily have fed four. Yes, the men were big and perhaps the chef calculates that tourists expect to get their money’s worth, but this was not the Chez Benois that we remembered. When my rolled filets of sole nantua arrived (partly raw), bathed in the same soupe d’ecrevisse that I had ordered for my entrée, the Benoit experience was, for me, over.

I do not wish to malign a great man like Ducasse, but perhaps stretching talent over several restaurants (and countries) increases the risk that one of the places can slip. In my state of great expectations, I was sad that his Parisian venue had changed so radically, becoming something of a tourist stop.

On the other hand, it also provided a stimulus to seek out new small places. We wanted to eat simply, in places that offered old-school portions, the real owner working in the kitchen, and marvelous French waiters scurrying about, juggling so many tasks at once with good humor thrown in at no extra cost. Yes, I said good humor – we have rarely had anything other than pleasant experiences in little Paris bistros, in shops, in hotels, and simply asking advice of Parisians when we were lost.

A very “good fork” friend of ours in Los Angeles suggested that Claude Colloit, a little restaurant in the Marais, was worth a detour, if only for the oyster sorbet. There we found a charming young waiter from Mongolia with a cockscomb hairdo in the style of so many soccer players. And oyster sorbet; and tiny blue shrimp with shitake mushrooms in a bonito broth; and a lamb souris that almost melted on the plate into its subtle honey sauce; and whipped potatoes lightly scented with orange and lemon oils, dressed with a frothy cream of sesame oil and wasabi; and a dessert of chocolate ganache with a little dollop of sweet Kalamata olive paste.

I was in Los Angeles years ago when chefs went “creative,” minceur and all the rest, and I adore the simplicity of Italian food, but when in Paris, what the hell, try it all. Claude Colliot knows his stuff and the very small menu (for me, always a good sign) changes with his whims.

Another sweet little place around the corner from our hotel was Vins des Pyrénées, family-run with daily €15 menus for an entrée and plats du jour or plats de jour and dessert (you can always have the three for a little more). Here we ate little crispy shrimp and traditional escargots, a buttery lamb shank scented with rosemary along with a little stacked eggplant and potato co-star, and I, the fish eater, tried the haddock with potatoes in cream. Seeing almost everyone near us ordering the Vins de Pyrenees’ version of Pain Perdu -a little square of airy brioche in a caramel sauce (made with that amazing butter dotted with sea salt from Guerànde) topped with a small egg-shaped caramel ice cream-we did the same. I’ll go back just for that, and I’m not a dessert lover.

Perhaps these new surprisingly good little places are simply part of the “you and the night and the music” syndrome into which we fell so willingly at Beniot those many years ago. Old memories are to be cherished, to be sure, but it’s invigorating to have new ones stored away for the next visit.