Long For This World 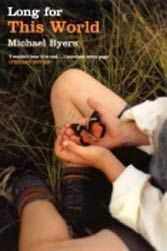 Dr. Henry Moss is a Seattle geneticist who may have found a cure for a syndrome that causes premature aging and afflicts his only local patient, a dying 12-year-old named William Durbin. His devotion is exemplary. Then there’s Ilse, Moss’ Austrian-born hospital administrator wife whose moods are intense, incandescent. The couple has two teenagers, a boy and a girl (she plays basketball and has a crush on a black player on the boy’s team).

This is a vivid portrait of a middle class American family with keen attention to idiosyncrasies, discontents, and hopes. It is also a penetrating look into medical ethics. Moss and Ilse leap off the page, an astounding accomplishment for a first novel. Byers at one point says of Ilse: “She had trained people to be conscientious and decent, at least as far as was possible.” Someone trained Byers the same way.